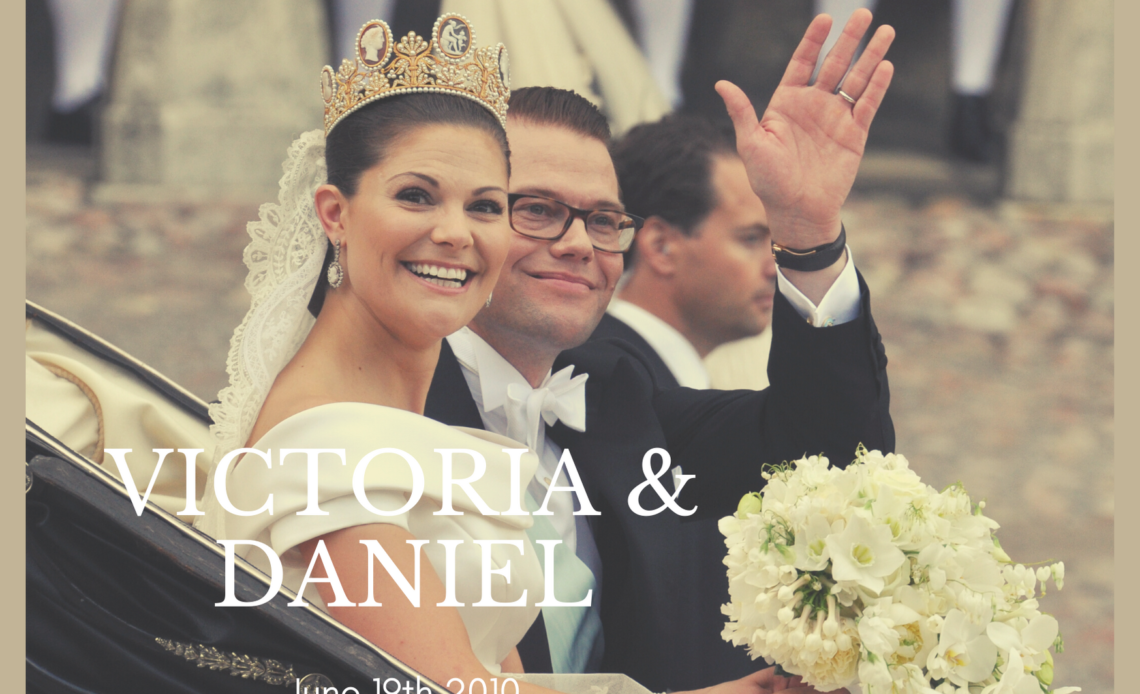 When Crown Princess Victoria married Daniel Westling on 19 June 2010, she walked down the aisle in a simple but bespoke gown by Swedish designer Pär Engsheden.

The iconic pearl white wedding gown was made of duchess satin with detachable a five-metre train that was made to match the shape of the veil. The round-necked dress was short-sleeved and slightly off the shoulder. The back of the gown’s collar dips into a V and features buttons down the back to the slimline skirt. There is also a waistband that wraps around her centre and buttons on the back. She wore shoes made from the same material as her dress, as well.

The Crown Princess wore the Cameo Tiara – the same tiara her mother (precisely 34 years before) and paternal aunts wore when they wed, as well as the Brussels lace veil they all wore before her. The intricately laced veil originated with Queen Sofia in Sweden in the 1800s. Of course, Victoria followed tradition and wore the twig of myrtle in her hair.

Victoria also wore the accompanying bracelet and earrings from the Cameo set.

When the dress went on display in the 2016 Royal Wedding Dress exhibit at the Royal Palace, the designer told Sydsvenksan, “It is of double-sided side duct and is quite heavy, but the weight is distributed, so it does not become so heavy once you wear it.”

Many brides follow the “something old, something new, something borrowed, and something blue” tradition and Victoria was no exception. While the blue was not apparent to the eye, a blue bow was stitched inside the dress. Its location is only known to the Crown Princess and designer.

The dress was short-sleeved, according to the designer, due to the heat in June. The Crown Princess and Prince Daniel had a carriage ridge through Stockholm and a boat ride in the heat before their reception, so the short sleeves helped to keep Victoria cool.