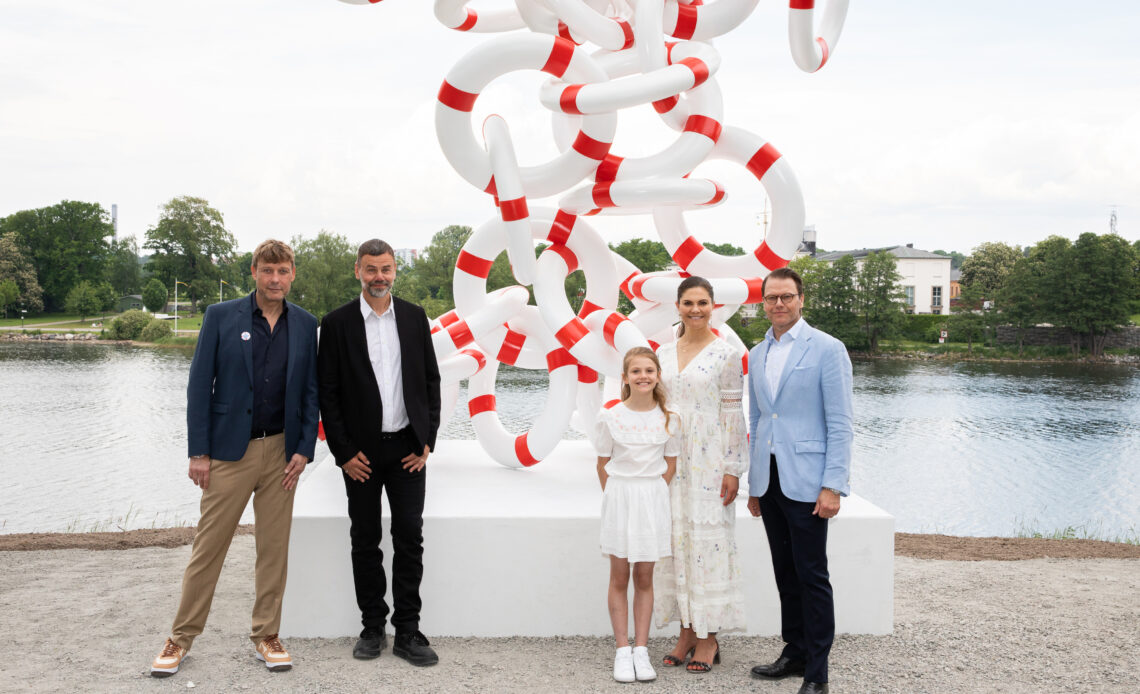 Crown Princess Victoria, Prince Daniel and Princess Estelle have inaugurated a permanent installation in the Djurgården island park in Stockholm.

The sculpture, created by Danish-Norwegian duo Elmgreen and Dragset, has been sponsored by the Princess Estelle Cultural Foundation, created in 2019 with the aim of promoting culture and helping artists.

The ceremony was held partially in person and partially via video link. The Danish and Norwegian Ambassadors to Sweden were also present, in honour of the the national provenances of the two artists.

Prince Daniel gave a speech, by video, highlighting the importance of art in the way we preserve out past, we live our present and we envision our future. He also underlined the strong ties Sweden holds with Denmark and Norway, and how this installation will help cement this relationship.

The artists base their work on everyday objects and the change in perspective created by their use in unconventional situations. The duo is based in Berlin, and has worked together since 1995.

Michael Elmgreen was born in Denmark in 1961, while Ingar Dragset was born in Norway in 1969. They met in Copenhagen in 1994, and, since 1995, their work has received widespread recognition, including a special mention at the Venice Biennale. They have been commissioned to create several permanent installations; the most poignant was the one inaugurated in 2008, a memorial in Berlin for LGBTQ people persecuted by the Nazis.

The latest sculpture unveiled in Sweden is called “Life Rings” and is composed of lifebuoys interlocked, projecting themselves 8 meters into the sky. The symbolism is clear: in moments of crisis, represented by a single lifebuoy, we need to keep together and create strong community ties in order to survive.

Over the course of the summer, the Princess Estelle Cultural Foundation will offer daily guided tours of various sites that feature art installations.