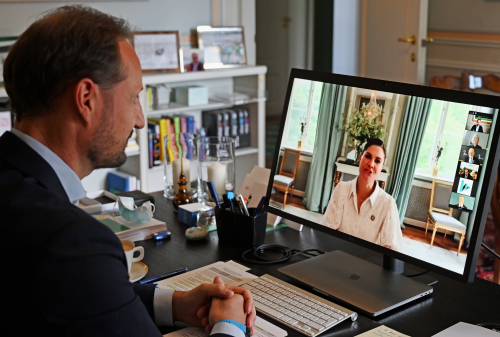 On Tuesday afternoon, Crown Prince Haakon of Norway and Crown Princess Victoria of Sweden teamed up to highlight environmental issues with the sea. The digital conference under the auspices of the UN Development Program, UNDP, focused on the state of the sea and what can be done to manage marine resources in a sustainable way. While the conference was opened by the Swedish Crown Princess, Crown Prince Haakon led a conversation about marine litter with the first nine winners of the UN’s Ocean Innovation Challenge.

During her opening speech, Crown Princess Victoria said: “It is gratifying to see the diversity and the tangible ambitions of your ideas, with solutions to one of the biggest threats to ocean health, marine pollution. Hopefully, your work can contribute to more generations being able to experience all the wonderful gifts that a healthy ocean brings.”

In addition to Crown Princess Victoria and Crown Prince Haakon, the conference was also attended by, among others, the competition winners, UN Special Envoy for the Sea, Sweden’s Deputy Prime Minister and Minister for Climate and the Environment Per Bolund, UNDP Administrator Achim Steiner and Norad’s Director Bård Vegar Solhjell.

The UNDP conference took place digitally with participants from across the globe, and it was no coincidence that the Ocean Innovation Challenge was held on World Ocean Day, which highlights how climate change, overfishing, pollution and littering endanger marine life. The Ocean Innovation Challenge Award promotes new and innovative solutions to preserve life underwater.

During the conversation led by Crown Prince Haakon, His Royal Highness said: “Some of the most severe challenges we are facing in the world today, like climate change and the threat to life below water, we share as a global community. They connect us. We need to unite to solve them.”

Crown Prince Haakon was appointed Goodwill Ambassador for UNDP in 2003, and in May, he signed an agreement for two more new years as Goodwill Ambassador for the UN Development Program. As UNDP ambassador, the Crown Prince works to promote the UN’s sustainability goals, with a special commitment to sustainability goals, poverty eradication, and marine life.