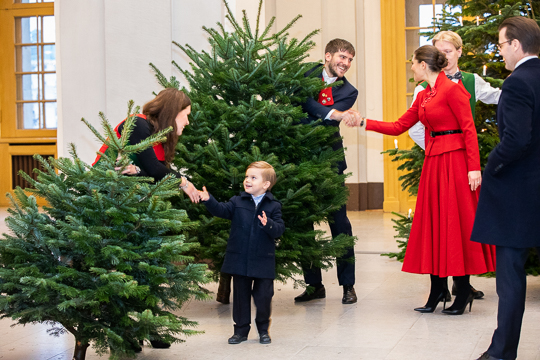 Prince Oscar of Sweden accompanied his parents, Crown Princess Victoria and Prince Daniel, to receive the Christmas trees for the Royal Palace.

Students from the hunting master’s program at the Swedish University of Agricultural Sciences visited the Royal Palace to hand over the Christmas trees in an annual tradition, which has been going on since the 1960s. According to the Swedish Royal Court, “The ‘king fir Christmas tree’ has received its name from this tradition, it was earlier called Nordmann fir.”

The students had a number of large Christmas trees but also one smaller tree especially for Prince Oscar, who seemed delighted to have his very own Christmas tree. He picked it up by the top and tried to carry it away before his mother Crown Princess Victoria helped him. Although initially shy, Prince Oscar shook hands with all the students. The adorable video posted by the Swedish Royal Court shows Oscar swinging between his parents as they carried his Christmas tree.