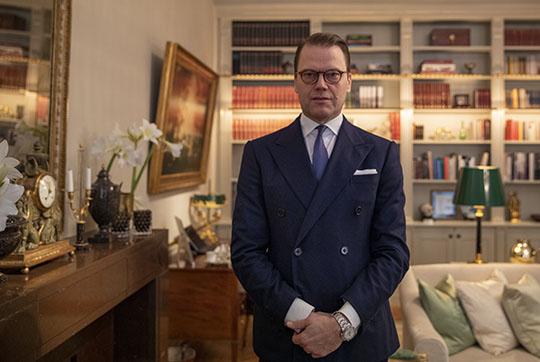 The Swedish Royal Household has announced that Prince Daniel has tested positive for Covid, just 24 hours after confirming that his wife, Crown Princess Victoria, had also contracted the virus.

Like the Crown Princess, Prince Daniel is also fully vaccinated and is experiencing mild symptoms.

Because of this double positive diagnosis, the entire family is quarantining at home, at Haga Palace.

The statement also specifies that the couple’s agenda for the next few weeks will be adjusted accordingly.

This is the second time both Crown Princess Victoria and Prince Daniel have tested positive for coronavirus. Their first diagnoses came on the 11th of March 2021, a few months after the Princess’s brother, Prince Carl Philip, and his wife, Princess Sofia, contracted the virus.

Crown Princess Victoria and Prince Daniel are isolating at home with their children, Princess Estelle and Prince Oscar, who will not be going to school in person, as the Swedish government’s guidelines recommend that the entire family self-isolates in case of a positive test for someone that lives under the same roof.

The Crown Princess was supposed to attend a defence conference on January 9th and 10th, which had already had to make adjustments for her father, King Carl XVI Gustaf, to participate virtually, after he also tested positive a few days ago.