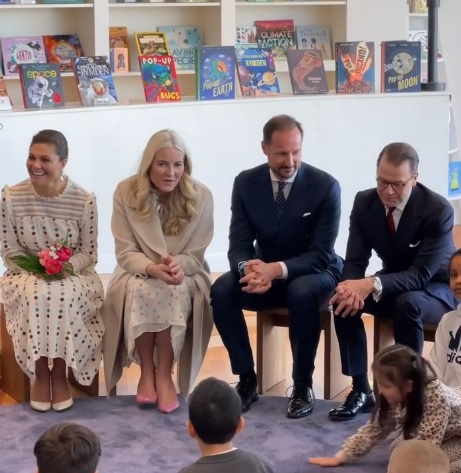 This week has started with a special royal visit between good friends designed to boost two countries.

On May 2nd 2022, Crown Prince Haakon and Crown Princess Mette Marit of Norway began a three-day official visit to Sweden where they are being hosted by Crown Princess Victoria and Prince Daniel. Their first day consisted of many events.

The main purpose of the visit is to strengthen the economic ties between the two neighbouring countries which share the longest and oldest national border between two countries in Europe.

However, despite the focus on economics, it was a special moment between two future queens that caught everyone’s attention. Crown Princesses Victoria and Mette Marit were asked to sum each other up in just a few words by journalists from the Swedish magazine “Svensk Damtidining”. And both seemed moved by what the other said.

Crown Princess Mette Marit was asked by the press if she could describe her Swedish colleague in three words. After calling her friend, colleague and relative both warm, genuine and caring, the Crown Princess continued with a little elaboration.

Crown Princess Mette Marit said: “Crown Princess Victoria is a fantastically nice person who I value very highly and who I am incredibly happy to have such a good, close and warm relationship with. We have done so much good together, we have travelled a lot together and we have had many exciting experiences together. I place so much value on that.”

The Norwegian Crown Princess continued: “And then I am also especially happy, because we have a daughter at home who is heir to the throne, and to then have such a person as Victoria that she can turn to in her future. We are very grateful for that, quite simply. It is very important for us on a personal level.”

It became very clear that this was the Crown Princess’ sincere opinion and that Crown Princess Mette Marit spoke from the heart. These were words that touched the heart of the Swedish Crown Princess. In fact, it seemed the words brought the future Queen of Sweden to tears as her eyes moistened as her friend spoke.

The King and Queen of Sweden welcomed the Norwegian royals for lunch before Crown Princess Victoria and Prince Daniel accompanied Crown Prince Haakon to the Norwegian Embassy in Stockholm for a discussion around business.

The first day of the visit ended at Norra Latin, an old school converted into a conference centre, where Crown Prince Haakon and Crown Princess Mette-Marit hosted a reception for the Swedish royals. There was, again, a focus on business and shared economic links as well as a chance to try Norwegian sea food and celebrate the culture of both countries.