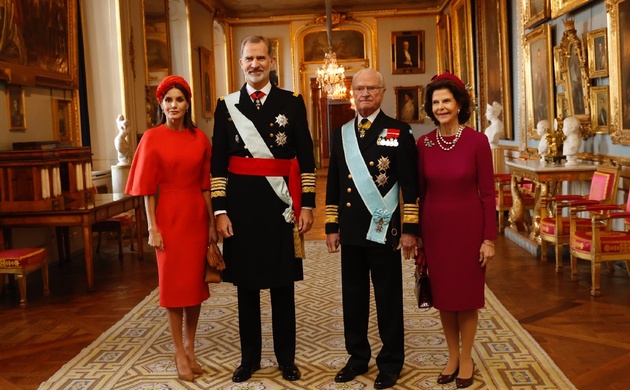 On the morning of Wednesday, 24th November 2021, Stockholm woke up dressed for a party, as the Swedish capital was getting ready for the two-days State Visit from the King and Queen of Spain.

King Felipe and Queen Letizia already landed in the Scandinavian country the day before, and in the evening they held a reception for the Spanish population of Sweden.

But a State Visit is not officially on until the ceremonial welcome has taken place which is why, on the morning of November 24th, King Felipe and Queen Letizia travelled to the Royal Stables, where they were met by King Carl XVI Gustav and Queen Silvia.

The four Royals then undertook the carriage journey from the stables to the Royal Palace, where a representation of the Grenadier Guards of the Life Guards was waiting for the two Kings to be reviewed.

Following the military parade, the official welcome ceremony continued with the introduction of King Felipe and Queen Letizia to members of Government and the Parliament of Sweden, while King Carl XVI Gustav and Queen Silvia were introduced to the Spanish delegation.

Once inside the Palace, the Spanish King and Queen received a warm welcome from the rest of the Swedish Royals: Crown Princess Victoria, Prince Daniel, Prince Carl Philip and Princess Sofia were all present to greet their guests.

In the Lovisa Ulrika Hall of the Palace, both Kings gave short speeches to thank Sweden for their hospitality, and to thank Spain for the collaboration efforts they have made with the county currently hosting them.

In the afternoon, King Felipe and Queen Letizia visited the “Synapsis. Art and science of Spain. From Ramón y Cajal to our days” exhibition at the Nobel Museum, focussed the work of Spanish scientists, taking as a starting point the pictures of neurons drawn by Nobel prize winner Santiago Ramón y Cajal.

The Spanish Royal couple was accompanied by King Carl XVI Gustav and Queen Silvia, and, because of the short distance from the Royal Palace and the Nobel Museum, the four decided to make the journey by foot, walking through a Christmas market on their way, stopping at a small house that was selling hot chocolate.

Following the exhibition, King Felipe and Queen Letizia had separate engagements on their agendas. King Felipe was welcomed to the Swedish Parliament, the Riksdag, where he held a meeting with the President Andreas Norlén and the Adjoint Secretary Ingvar Mattson.

In the meantime, Queen Letizia, accompanied by Queen Silvia, visited the Karolinska Institute Hospital, where she held a meeting with representatives from the rare diseases, marrow damages and end-vascular organ-selective therapy. Rare diseases are one of the key areas of work for Queen Letizia back home, so it made sense for her to see how other countries deal with similar issues.

Before the State Banquet in the evening, King Felipe also had a meeting with outgoing Prime Minister Stefan Löfven, as is traditional in such visits. The contents of these discussions are rarely made public, but it can be imagined that, among other things, the pair talked about recovery from the 20 months of economic and social uncertainty due to the global shutdown.

The State Visit will end on November 25th 2021, with King Felipe and Queen Letizia expected to give a reception in honour of King Carl XVI Gustav and Queen Silvia.