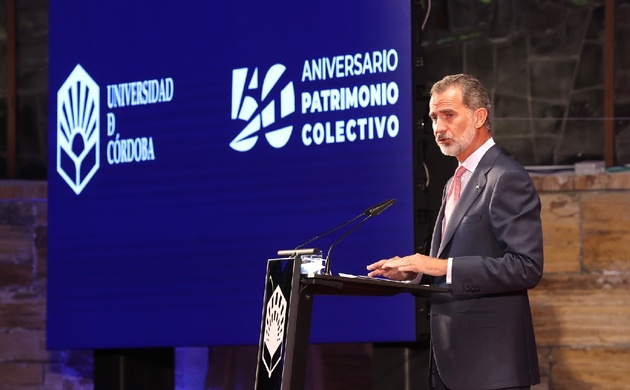 King Felipe of Spain travelled to the Rabanales Campus of the University of Córdoba to preside over the opening ceremony for the 2021-2022 academic year.

From the latter, His Majesty received the symbolic sceptre of the dean. King Felipe then unveiled a plaque commemorating his visit before meeting with all heads of the Spanish universities present at the event.

All authorities present processed to the Juan XXIII event hall where, after a musical interlude and a lecture on DNA research progress, His Majesty gave a speech.

King Felipe began by offering words of encouragement to the population of La Palma island, which is currently experiencing a volcano eruption, as well as thanking all emergency and rescue personnel currently involved in evacuating people from their homes and trying to limit the damage to properties and livelihoods.

The speech went on the emphasize the role university education plays in creating an environment in which knowledge is passed on to a new generation that is hopefully going to use it to create a better society.

His Majesty highlighted the role science has played during the last 18 months, in which a life saving vaccine has been developed at speeds that were unthinkable only a few years ago because of the amazing progress made by technology and scientific research.

King Felipe also acknowledged the entire university environment for the challenges they faced during the most difficult months of the global shutdown. He praised the education system for its efforts to bring back in-person learning, which is essential not only for academic reasons but also because university life interactions are a key aspect of the construction of individual social skills.

The event concluded with an Academic Parade and a meeting with Deans and university staff.

It is a tradition to select a university that is celebrating an important milestone to do this. In the case of Córdoba University, 2021 marks the 50th anniversary of its foundation.