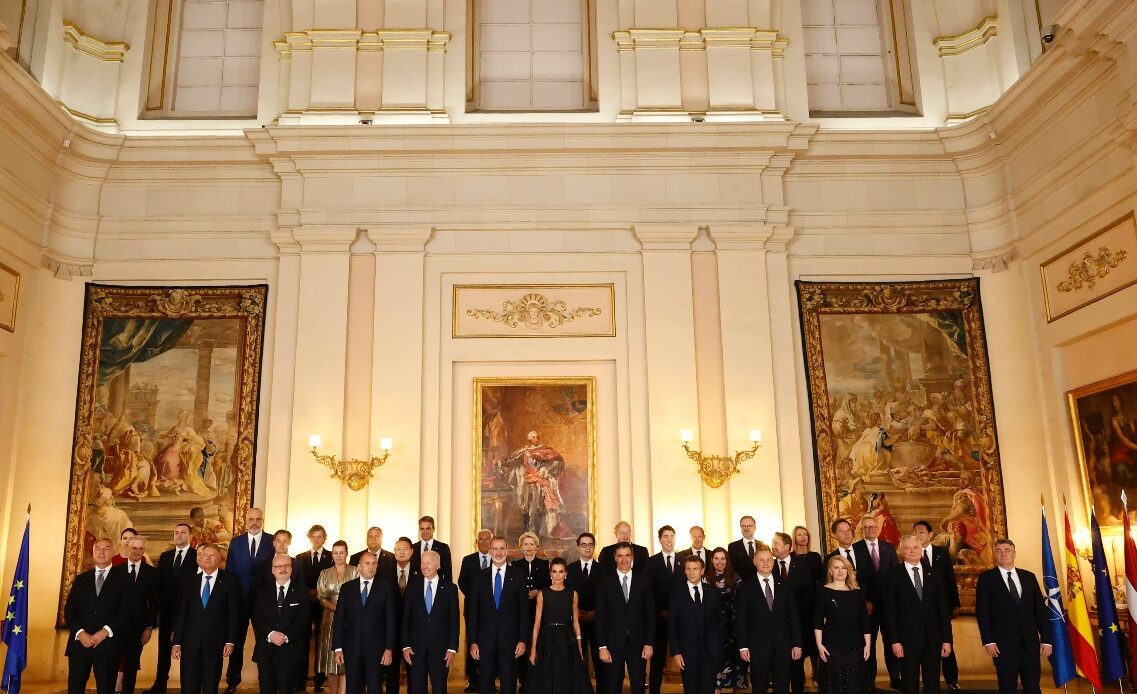 King Felipe and Queen Letizia welcomed guests as they arrived at Madrid’s Royal Palace to attend the opening dinner of the NATO Summit taking place in the Spanish capital on Wednesday and Thursday.

With the invitation-only requesting cocktail attire, Queen Letizia recycled her Magna Magnolia dress from The 2nd Skin Co which she debuted for the 2021 Princess of Asturias Awards. She paired it with her Gotrianc heels by Manolo Blahnik and, most importantly, the earrings and one of the two bracelets from the joyas de pasar, the group of jewels left by Queen Victoria Eugenia to the Spanish crown so that all Queens after her could wear them.

Guests arrived as soon as they finished their informal, bilateral meetings on the day that preceded the actual summit. NATO Secretary General Jens Stoltenberg and Turkey’s President Erdogan couldn’t make it at the last minute because they were negotiating an ultimately successful lift of the Turkish ban on Sweden and Finland’s bid to join the Alliance.

Nevertheless, authorities were present in abundance, and they were all escorted in the Throne Room, where the King and Queen welcomed leaders and their spouses. There were many heads of state and government from NATO’s 30 member countries, as well as four EU countries that are not NATO members, four Asia-Pacific countries that were invited to the summit (Australia, Japan, New Zealand and South Korea) and leaders of the EU Commission and Council.

A lighthearted moment happened when the Prime Minister of Italy arrived in the Throne Room; up to that point, the King and Queen had only used English to greet their guests, despite King Felipe also speaking French and some Greek (Queen Sofía was born and raised there). But when Prime Minister Mario Draghi greeted them in Italian, King Felipe replied in the same language, telling him “Good evening” and “It is a great honour,” before they reverted back to English.

Before being called to hold the position of Prime Minister of Italy, Mario Draghi was the President of the European Central Bank for eight years, from 2011 to 2019.

Once all guests had arrived, the leaders reunited in the Hall of Halberdiers for a “family photograph” before they all moved in the Gala Dining Hall, where the dinner was offered.

The menu included cod with menier sauce, tapioca and trout eggs, as well as a coconut  mousse dessert with mint powder and passion fruit. The served dinner, as well as the cocktail food served before, were put together by chef Paco Roncero, who wanter a dinner “based on the latest food trends, with a touch of Spain.”

Before food was served, King Felipe offered a few words to welcome his guests and remark on the historic occasion represented by this summit, which coincides with the 40th anniversary of Spain’s entrance in NATO.

His Majesty said: “Never before has this palace embraced and seated such a large number of top world leaders at a time. This is not the first time −however− these walls and tapestries have witnessed a NATO gathering of this nature. It happened in 1997, also in times of intense change and reshaping, not only in Europe.”

He also added: “The strategic optimism of 1997 must give way, not to pessimism, but to strategic realism. The Madrid Summit must stand for the future; it must provide the conviction, the guidance and the necessary instruments for us to adapt to this new strategic reality and to walk with determination towards a future in which our societies can feel safe and live in peace.”

And he concluded: “A new era may be dawning for NATO, here in Madrid,” much to the delights of all guests present, which included French President Emmanuel Macron, US President Joe Biden, the Prime Ministers of Belgium (Alexander De Croo), the Netherlands (Mark Rutte), Denmark (Mette Frederiksen), Canada (Justin Trudeau), Australia (newly-elected Anthony Albanese) and New Zealand (Jacinda Ardern).

The Madrid NATO Summit is taking place on the 29th and 30th of June, in a Spanish capital that is experiencing record high temperatures, as well as security measures unlike anything they have ever seen before. While King Felipe will welcome leaders and hold some brief encounters with them, Queen Letizia is expected to act as the host for all consorts attending the summit.