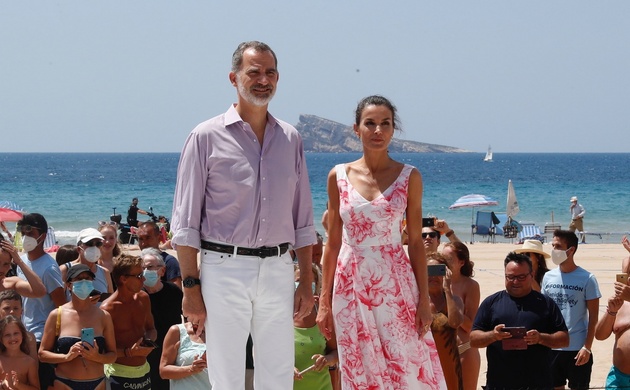 King Felipe and Queen Letizia visited Benidorm and Valencia on Friday, the latest stop on their tour of the autonomous communities of Spain.

During their visit, King Felipe and Queen Letizia held a meeting with the Business Confederation of the Valencian Community, which included representatives and union organisers. Afterwards, they walked along the beach at Levanta and stopped at an ice cream parlour, while chatting with beach maintenance and management workers.

At the ceremony, King Felipe said: “Today more than ever, we need to undertake—create—on the basis of design and innovation. As we also need to increase the resources dedicated to research, which is the previous step to knowledge-based innovation. In this way, we will be able to build the future with much more solid foundations.”

He added: “Spanish design and innovation are excellent letters of introduction of our country—of our creativity and our economy—internationally. These elements, the result of innovation and investment in R&D, are more necessary than ever because of their ability to drive our economic growth.

“A sector that is also truly necessary, because if we want to make our economic system also sustainable, we have to generate innovative products, create patents and promote exports. In this challenge, the design and the exploitation phase of the knowledge that innovation implies play an essential role.”

The Innovation and Design Awards recognises people and businesses “that have made innovation an essential element in the development of their professional strategy and business growth, as well as awarding professionals who have contributed significantly to the increase in the prestige of Spanish design and to the entities that, incorporating it into their business strategy, have shown that design is a powerful lever for innovation and competitiveness,” according to Casa Real. They are awarded by the Ministry of Science.

King Felipe and Queen Letizia met with the winners and the jury members at the Science Museum and afterwards left to return to Madrid.