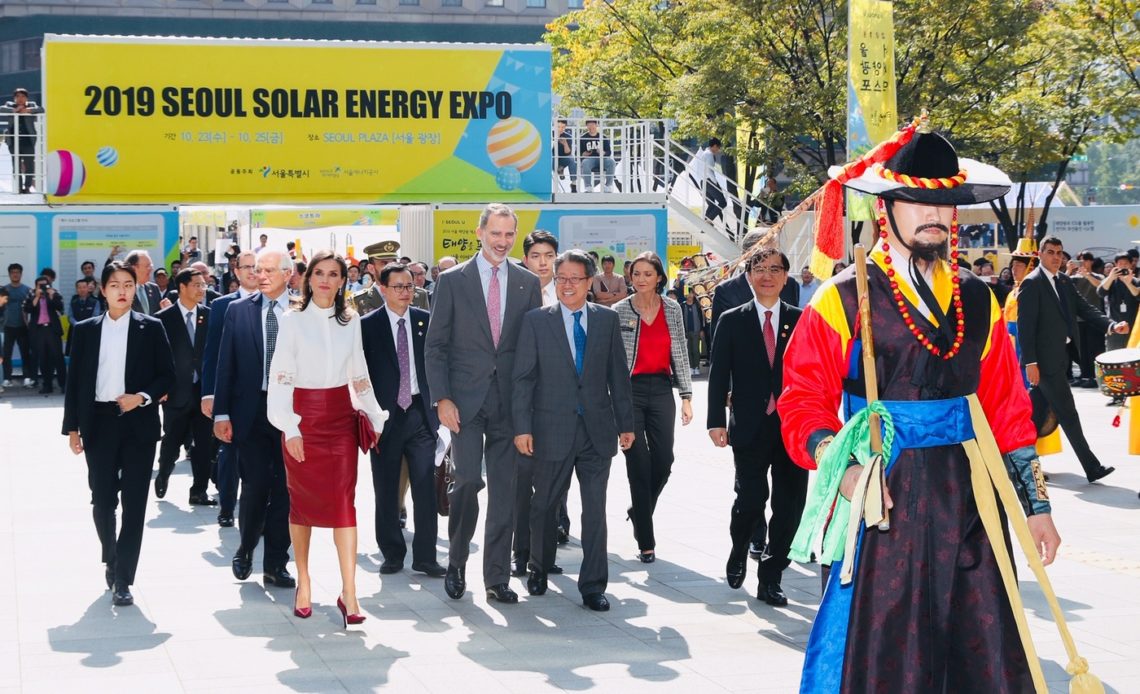 On 24 October, King Felipe and Queen Letizia spent their last day in South Korea, ending their four days trip to Asia where they also attended the Enthronement Ceremony of Emperor Naruhito in Japan.

The day started with separate events for the royal couple. King Felipe attended a breakfast meeting with the representatives of the main industrial conglomerates of the country. He then attended a Spain-South Korea business meeting with the President of South Korea. King Felipe also visited the National Assembly of South Korea where he met with the President of the National Assembly, Moon Hee-Sang.

Queen Letizia and the First Lady of South Korea visited the Headquarters of the Commercial Investment Promotion Agency of the Republic of Korea (KOTRA). There, they attended a meeting with representatives from South Korean technology companies focused on improving the lives of disadvantaged people, helping to combat the climate crisis or quickly detecting diseases such as malaria.

Queen Letizia then joined King Felipe to visit Seoul’s City Hall. During a meeting with the Mayor of Seoul, Park Won-Soon, the King and Queen of Spain had the opportunity to learn more about the Seoul Smart City project which aims to manage in a sustainable and efficient way this city of 10 million inhabitants. Afterwards, King Felipe and Queen Letizia were made Honorary Citizens of Seoul by the mayor.

In the afternoon, King Felipe and Queen Letizia visited LG Science Park where they learned about the evolution of the company and its main projects. They also visited the Innovation Gallery. The state visit ended with a reception for the Spanish community leaving in South Korea at the Four Seasons Hotel.

In his speech, King Felipe said: “It is you who are the first representatives of Spain in South Korea, who make the most outstanding contribution to this historic relationship that unites our two peoples. A relationship of friendship and cooperation, a willingness to understand, to work together, that I had the opportunity to convey to the President of the Republic in our meeting yesterday. […] The opportunities that open up for collaboration between our two countries are huge, and it is you who are in a better position to take advantage of them.”

Following the reception, King Felipe and Queen Letizia departed Seoul to fly back to Spain.