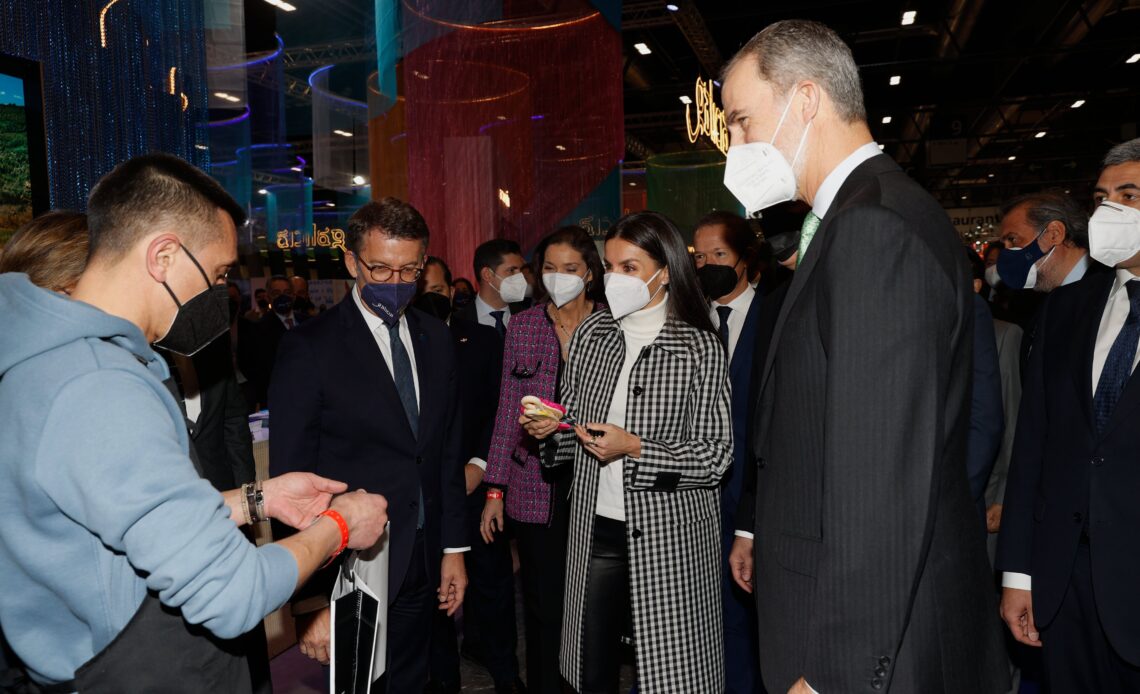 Tourism was one of the worst affected during by the pandemic, and King Felipe and Queen Letizia have done their best since 2020 to lend a hand to the sector.

Hence they couldn’t miss FITUR, Spain’s annual tourism fair, which is a traditional appointment in the Spanish royal calendar. And so on Wednesday, 19th January 2022, Their Majesties arrived at the fair complex IFEMA in Madrid to take a tour of this year’s installation.

The King and Queen were also accompanied by many Spanish authorities, that included the Presidents of the two chambers of Parliament, the Minister of Industry, Commerce and Tourism and many Presidents of Autonomic Communities.

Their Majesties accessed the fair from Stand 9, and went on a tour that brought them through the pavilions for many Spanish Autonomous Communities, as well as Morocco, Jordan and Portugal, three nations that have a special diplomatic and historic relationship with Spain.

Because the Dominican Republic was this year’s featured country, the grand finale for the tour was the nation’s stand, where the King and Queen were treated to a traditional dance performance and an abstract of a folklore song, as well as a demonstration of the production of handmade cigars.

FITUR turned 40 in 2020, right when the tourism industry received its toughest blow to date from the sudden global shutdown and subsequent traveling restrictions. It is the best occasion to “promote brands, present innovative new products, get to know the latest trends and fill your agenda with contacts and perspectives”, according to the Royal house’s website.

In 2022, the fair will host about 100 countries with 70 official delegations, headed by the Dominican Republic.

Urdangarín is Infanta Cristina’s husband, and is still in the middle of a five years prison sentence for the Noos case. Because of the non-violent nature of the crime, he enjoys regular outings from jail including some overnight stays.

Reactions from the family have been scarce, with the couple’s second child Pablo telling Hola: “We are all serene, we are still going to love each other”. Friends of Infanta Cristina have come forth saying that the royal already knew about the pictures, while her older sister, Infanta Elena, declined to offer any comments to journalists.

Infanta Cristina is King Juan Carlos and Queen Sofía’s second child, and King Felipe’s older sister. She was stripped of her Royal agenda in 2010, when it first became clear that she would be involved in her husband’s legal woes. King Felipe also removed her title of Duchess of Palma after he ascended to the throne.

Infanta Cristina currently lives in Geneva, Switzerland with the couple’s four children (Juan, Pablo, Miguel and Irene), where she works for the Caixa Bank Foundation. Urdangarín was transferred to Spain to serve his prison sentence in a low-security penitentiary in Ávila, about 100 kms West of Madrid.