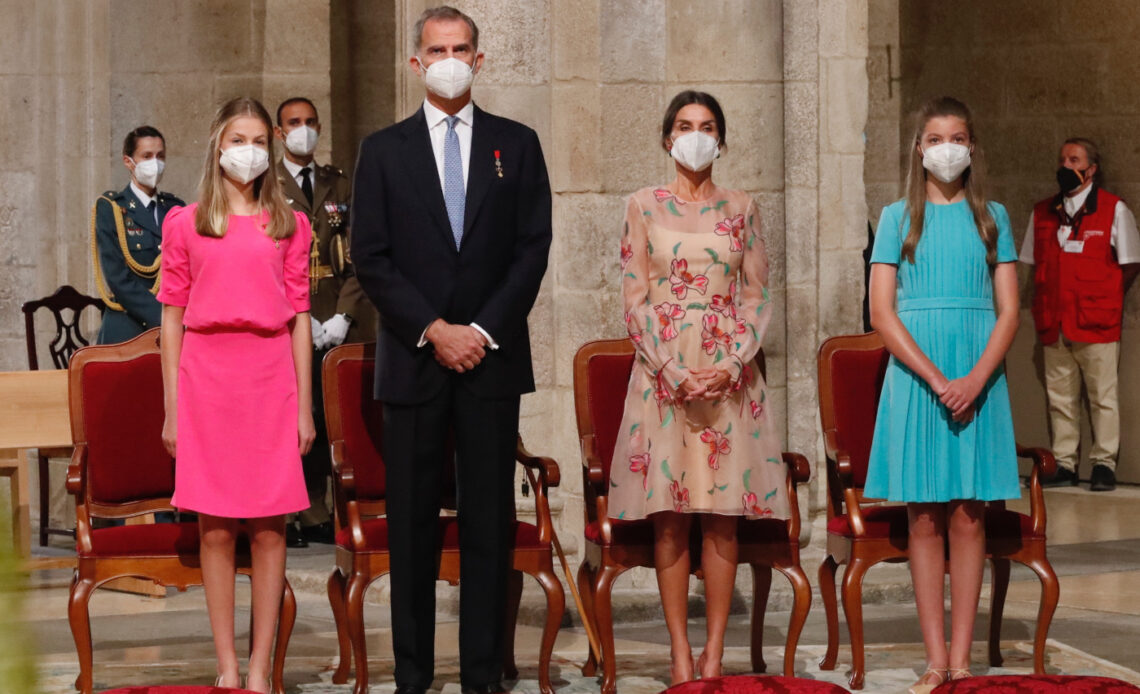 Princess Leonor and Infanta Sofía joined their parents for an ancient Spanish ritual over the weekend, paying tribute to the Patron Saint of Spain.

The teenage princesses, who have joined King Felipe and Queen Letizia increasingly at public royal duties over the past year, attended the National Offering to the Apostle Santiago, Patron Saint of Spain, at the Cathedral of Santiago de Compostela on Sunday.

The Royal Family was joined by several government ministers at the federal level and the local level, as well as military personnel, and were received by the Archbishop of Santiago de Compostela, Julián Barrio, for the ceremony.

King Felipe gave a speech at the National Offering, touching upon the global health crisis and how hope thrives despite the hardships the people of Spain have endured over the past year-and-a-half: “There are always reasons of gratitude to the Patron of Spain in this national offering that, as King, I have the honour to make. And on this occasion, when we gradually and prudently strive to resume the path that the pandemic wanted to interrupt, we want to instil hope in those who feel discouraged.

“The health crisis caused by COVID-19 is, without a doubt, one of the hardest experiences that we keep in our memory. In a very short time, we were immersed in an unknown situation that has changed habits, customs and routines and, above all, that has brought to the hearts of many people fears, uncertainties, concerns and, on many occasions, sadly, a deep pain for those who they left us.

“At times like this, headlights that shine and show the direction in the dark are essential. One of them is undoubtedly represented by citizens who, with their solidarity and dedication, with a great civic sense, made every effort to help their fellow men.”

After the Mass, the royals attended a brief ceremony at the Mayor’s Office where the golden guestbook was signed.

The Apostle Santiago is known in the English-speaking world as the Apostle James, one of Jesus’s disciples. He is believed to started his religious career by preaching in Spain, which led to his becoming the Patron Saint of Spain. His Feast Day is 25 July.