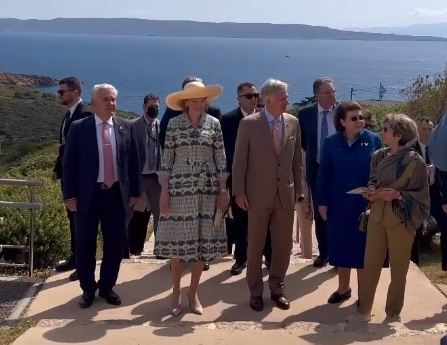 King Philippe and Queen Mathilde have continued their State visit to Greece with a second day full of events focussed on research and exploring the archaeological milestones of Athens.

The royal couple’s first stop of the day was the Adama centre, a structure that deals with the socioeconomic integration of refugees arriving in Greece. The country is one of the most affected in Europe by the phenomenon of immigration, especially from African countries, and has had to deal with an increasing influx of people fleeing violence and hunger.

The Adama centre is managed with a cooperative effort by Caritas Greece and the Catholic Relief Service, and is dedicated to creating contacts between those they support with businesses looking to specifically hire refugees.

Their second stop was the Sounion archaeological site. The King and Queen of the Belgians were accompanied by the Greek Minister of Culture Lina Mendoni, who offered explanations in particular about the Temple of Poseidon, dating back to the 5th century BC.

It was then time to switch the focus on the sectors of cooperation between Greece and Belgium, and Their Majesties visited Demute Studios, a business focussed on research to bring immersive technologies to touristic and cultural sites, in order to enhance the experiences of visitors.

The next event was a brainstorming session titled “Connecting past and future – The impact of new technologies on archaeology and the conservation of patrimony”, which featured researches that were conducted in tandem by Belgian and Greek teams.

The last stop of the afternoon was the archaeological site of Thorikos, an ancient mining town whose excavation and research is in the hands of Belgian archaeologists and researchers since 1963. The location’s biggest excavation site is the massive amphitheatre.

As it is tradition, the last event for day 2 was a gala evening held in the magnificent Acropolis, offered by the King and Queen of the Belgians to their hosts. King Philippe and Queen Mathilde called upon the Belgium National Orchestra to offer a concert to the Greek President and her partner.

The State Visit will reach its end on Wednesday, 4th May, with a day “entirely dedicated to the energy sector”, according to the Belgian Court’s press release.