On Thursday evening, Her Majesty Queen Sonja of Norway handed out the Queen Sonja Print Award 2018 to Emma Nishimura in the Royal Academy of Arts in London. The artist Emma Nishimura was born in 1982 and lives and works in Toronto, Canada. Her work includes both traditional etching, drawings and art installations. Works by Nishimura are found both in public and private collections and have been exhibited nationally and internationally.

A total of 42 artists were nominated for the award of the year by curators, museums and artists from all over the world.

Also, during the ceremony on Thursday, David Hockney received the honorary award for outstanding contributions to the graphics through his lifelong artwork. It was the first time the Queen handed out the brand new special honour award that honours a lifelong artistic partnership. David Hockney has been at the heart of the international art scene for decades and is one of the most popular and influential British artists from the 20th century. In addition to being a highly renowned painter and graphic artist, he is known as a skilled draftsman, technical innovator, photographer and scenographer.

Queen Sonja Print Award is the world’s leading award for graphic arts art and is distributed every other year. Originally, it was a part of the Nordic Prize, and the first winner was the Finnish artist Tiina Kivinen in 2012, followed by Danish Svend-Allan Sørensen in 2014. Then, the prize became an international award, and Tauba Auerbach from the United States received the award in 2016. 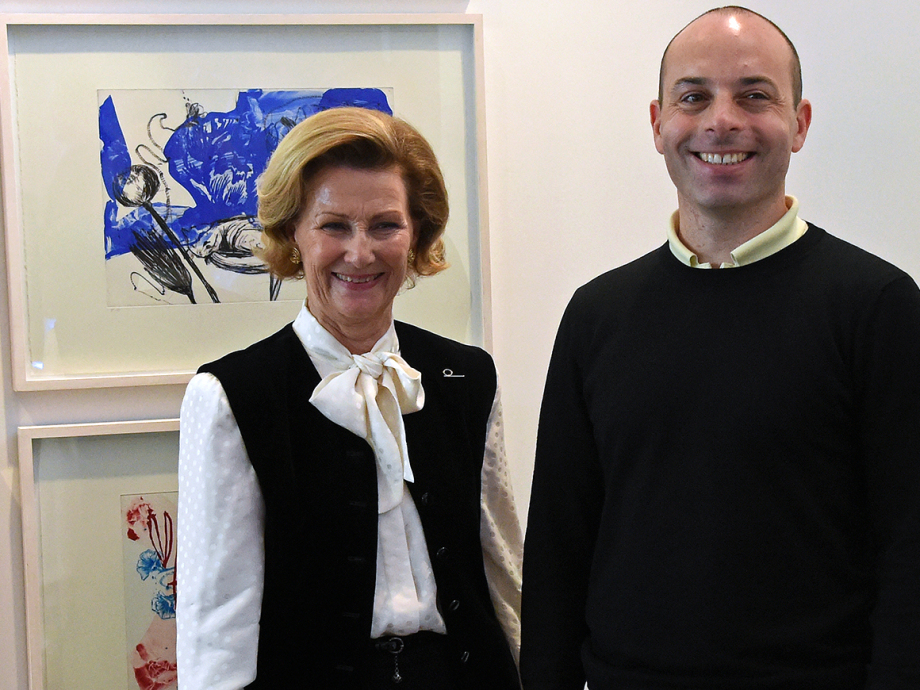 Queen Sonja with the first recipient, of the award, the Danish artist Adam Saks, in London. Photo: Sven Gj. Gjeruldsen, the Royal Court.

The prize consists of a grant of NOK 400,000. In addition, the winner gets a study stay at Ole Larsen’s workshop in Helsingborg. The purpose of the prize is to inspire interest in – and the development of – graphic art.

Queen Sonja is, and always has been, very interested in art. In 2016, the Queen opened a brand new art centre in the Norwegian town of Trondheim. The Queen is a competent artist herself. She has created a large number of art objects and cooperated with numerous great artists, including Kjell Nupen. Her Majesty has, for many years, handed out “The Queen Sonja Print Award” which is awarded every two years. Until 2014, this prize was exclusively intended for artists from the Nordic nations, but in 2014, it was made into an international award. That same year the Queen established a brand new award “The Kjell Nupen Memorial Grant” in memory of her good friend, Kjell Nupen.