In connection with the imminent wedding of Princess Eugenie’s and Jack Brooksbank, we take a look at other princesses who have married commoners. Here is the story of Princess Märtha Louise of Norway, who married the author and artist, Ari Behn in 2002.

Ari Behn was born in Aarhus, Denmark. As a child, he lived in Denmark and England for a period before the family moved to northern Norway. The family settled in Eastern Norway when Ari was six-years-old. He has previously worked as a truck driver, bartender and at a school. He has a bachelor’s degree from the University of Oslo, in subjects such as the history of ideas and religious history. As a young adult, Behn spent several years travelling in Africa, the United States and Asia.

Princess Märtha Louise was introduced to Ari Behn through his mother Marianne Behn, and the two immediately became very good friends. Ari Behn had his literary breakthrough the very same year, in 1999 with a collection of novels he had written. The two created a strong friendship, and soon, they were more than friends. Three years later, in 2001, the Royal Court announced that they would marry the next year, in 2002.

The festivities began two days before the wedding took place. On Wednesday, 22 May 2002, the entire Norwegian Royal Family and the Behn family arrived in Trondheim. There was a family dinner on the royal yacht “KS Norge” followed by a private party with friends in the Trondheim city centre.

The following day, Thursday 23 May 2002, royal guests arrived from all over Europe. They all gathered for a big lunch in the royal residence in Trondheim “Stiftsgården”. Many of the royals were accommodated there, while some stayed at one of the city’s finer hotels. In the evening, a concert was held in honour of the bride and groom before the Norwegian government held dinner for the royals.

The wedding took place on Friday 24 May 2002. It was held in Norway’s largest cathedral, Nidarosdomen, in Trondheim. The church was spectacularly decorated, and a total of 760 branches of the Märtha-lily were used to make the cathedral ready for a royal wedding. A total of 1,358,000 Norwegians watched the wedding on television; this was many considering that, at that time, only 4.5 million people lived in Norway.

The guests arrived at the cathedral beginning at 15:00 before the wedding ceremony started an hour later. It was the father of the bride, His Majesty King Harald V of Norway, who escorted his daughter up to the altar. The couple was married by Bishop Finn Wagle.

The wedding ceremony took an hour, and when the couple came out of the church, they were welcomed by a vast crowd of people. The wedding dinner was served in Trondheim’s royal residence “Stiftsgården” at 19:00. The rest of the party was held in the ballroom at the Stiftsgården.

“You are like the light that overcomes darkness. Knowing that you exist makes me know that God is also present. Together with you I no longer fear death. Through you, Märtha, life is good,” said Ari in his speech to Princess Märtha Louise during the dinner that took place after the wedding.

“You Märtha, are now entering a new phase of your life, Ari is now your closest, and you have to build a life together. The foundation will be the love you have confirmed to each other today. I look forward to keeping track of the life you are going to build together. What I am sure is that there will be no standard life. None of you is what you can characterise as A-4 people. You find your own way, and that road is often both exciting, original and unexpected.” 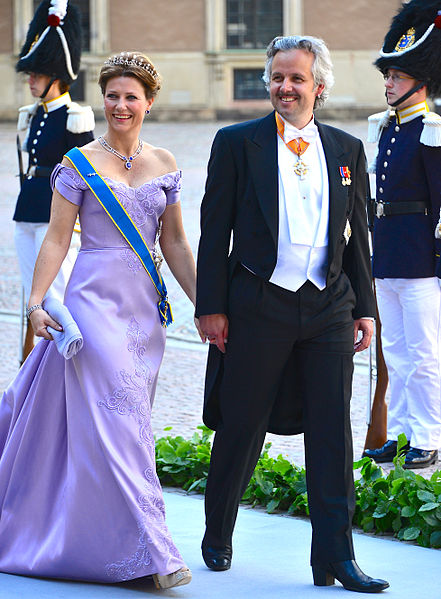 The day after the wedding, the newly married couple left for a five-week-long honeymoon by the Pacific Ocean. The wedding and the subsequent journey were paid by His Majesty the King’s personal fortune.

On Friday, 5 August 2016, it became known that the couple was separating. The divorce was peaceful, and they both said that they were good friends and would be travelling to celebrate with their three children.