PHOTO SPECIAL: Norway’s Royal Family appear in public for the first time in months to commemorate the country’s liberation 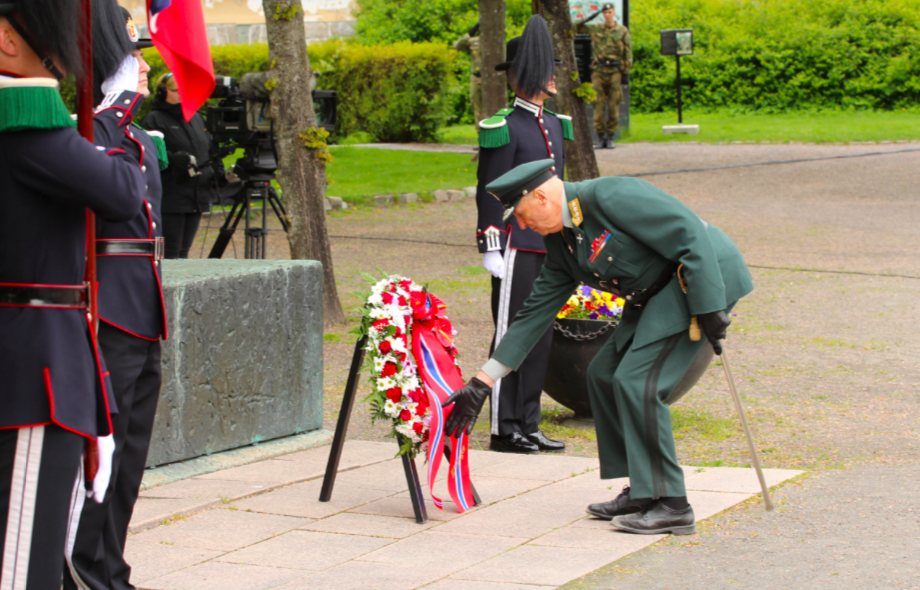 King Harald and Queen Sonja was joined by Crown Prince Haakon and Crown Princess Mette Marit on Friday to attend events commemorating Liberation Day and the National Veterans Day at Akershus Fortress in Oslo. This is the first time in months that the members of The Royal Family have appeared in such a public context because of the ongoing public health emergency.

Every year on May 8, Norwegians honour all veterans, from past and current conflicts, including those involved in the events of 75 years ago leading to the liberation of Norway from the German occupation in 1945. The Norwegian Royal Family has long traditions to participate at these events, as they themselves were directly affected during the war and had to live in exile for five years.

Liberation Day got underway a with a flag ceremony at Akershus castle, inside the fortress. Unlike previous years, Friday’s event was not open to the public. At 10am a short ceremony took place at Retterstedet. It was here where members of the Norwegian resistance were executed by the Germans during World War II. The ceremony consisted of a speech and floral wreath was laid down, decorated in red, white and blue. There were no guests present, but the event was broadcasted online.

A church service in memory of the Norwegians who died during the war was then held at the Castle Church at Akershus. This was followed by a flower ceremony at the National War Memorial. His Majesty’s guard held a short military parade and the rest of the military forces marched at the end of this display into the fortress-main-square to be received by The King.

King Harald arrived in the afternoon to perform the handing out ceremony of this year’s military medals. Just after the King arrived, a column of Norwegian fighters flew over the fortress in formation. King Harald laid a wreath on the national monument before a speech was held by both the Defence Minister and a common soldier.

Five years of German occupation ended 75 years ago, and Norway was once again a free nation. After the liberation on 8 May 1945, Crown Prince Olav was the first Norwegian Royal to return to Norway on May 13. He then took over the military command in the country and was temporary monarch. The following day all Norwegian resistance groups dropped their weapons.

King Haakon and the rest of the Norwegian Royal Family could safely arrive in Oslo on 7 June 1945. They were welcomed by hundreds of thousands of people. The streets were decorated with flags, and across the nation Norwegians shouted: “Long live the King.”

Following World War II, more than 100,000 Norwegians have served in almost a hundred different international operations in more than 40 countries across four continents. The day is commemorated with a number of events throughout the country, as well as a national main event at Akershus Fortress in Oslo. King Harald, the Parliament’s President, the Prime Minister and the Defence Minister participated in the ceremony.