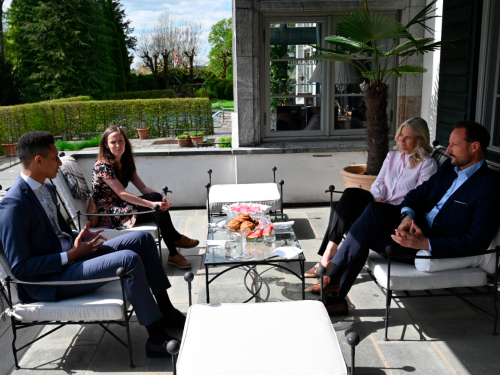 Norway’s royal couple and Crown Prince Couple recently met many of those who survived the terrorist attack on Utøya in Norway in 2011. This year marks ten years since the terrorist attack on the young people on Utøya and on the government quarter in Oslo. The Royal Family has met several survivors after the July 22 attacks and has reacted strongly to survivors being exposed to hate messages.

In a strong statement to the Norwegian tv channel NRK, Crown Prince Haakon said on Wednesday: “We react very strongly to the fact that survivors must endure provocation. That is not acceptable. Threats and hate messages are not okay in any context. And that it affects those who have experienced terror is almost incomprehensible.”

Crown Princess Mette-Marit added: “It was an attack on the Labor Party, on AUF, on the state and our society and became a national trauma. It is something we, like all other Norwegians, carry with us as part of our history. It is an open wound that, in many ways, can be difficult to talk about. That AUF members have been incited for their attitudes, I think, is shameful. I really think it is really shameful! I do not think we as a society can accept that.”

In recent weeks, the royals have had meetings and audiences with those affected by the terrorist attacks that took a total of 77 lives. Survivors, emergency services and volunteer helpers have had personal conversations at the Royal Palace and at the Skaugum Estate.

Eirin Kristin Kjær is one of those who met King Harald and Queen Sonja right after the 2011 attack. The last time she met the Queen was at Ullevål Hospital in the summer of 2011. Kjær had been shot several times when Queen Sonja visited her and other victims. With her, the Queen had gifts from the Royal Estate at Bygdøy and the Palace Park, including small jars and bottles with elderflower juice, rhubarb jelly, jam and cookies. On Wednesday, it was Kjær who brought a gift for the royal couple. “Never keep quiet, never forget” – her own book that tells about life after the terror and about how to rebuild Utøya.