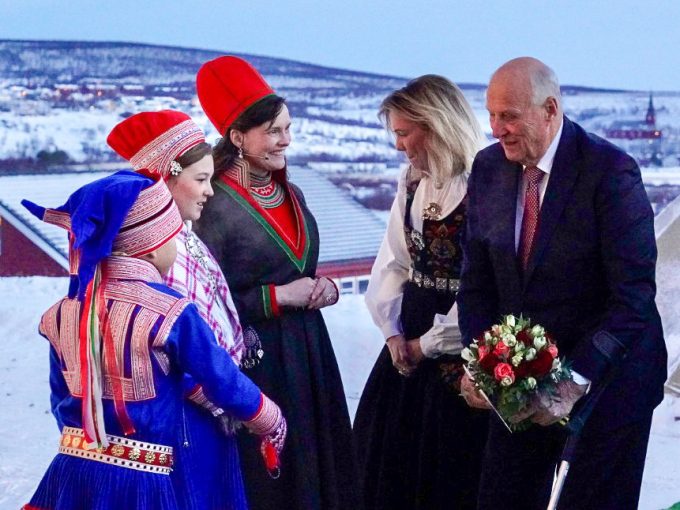 King Harald was present when the important and symbolic document “Lappekodisillen” came home to the Sami archive in Kautokeino, 270 years after the signing of the border treaty between Norway and Sweden. The Norwegian monarch is also a monarch over the Sami people living in the northern part of the nation.

King Harald was welcomed with a traditional Sami song and flowers when he arrived at the Sami science building for the presentation ceremony on Tuesday afternoon. State Secretary Haugsbakken from the Royal Norwegian Ministry of Culture made the symbolic presentation to Sami Parliament President Aili Keskitalo, who received the document on behalf of the Sami people. The document has so far been stored in the National Archive in Oslo, but the Sami archive at Sami University College in Kautokeino is now the new home for the document.

The traditional Sami song called “joik” was performed during the ceremony. There were speeches by the President of the Sami Parliament, State Secretary Haugsbakken from the Royal Norwegian Ministry of Culture and Norway’s National Archivist Inga Bolstad, in addition to the historian Steinar Pedersen giving a talk on the significance of the document.

“Lappekodisillen” is the name of an addition to the border treaty of 1751 between Denmark-Norway and Sweden, which then also included Finland. This special treaty protects Sami rights and stipulates the duties of the states and is called by many the “Sami Magna Carta.” The boundary agreement of 1751 fixed the boundaries in the northern areas of Scandinavia. The work started in 1738, and through inspections of the areas, many maps were drawn. The border from 1751 between Norway and Sweden still applies and is Europe’s longest border between two countries.

The Sami people lived in the areas that were divided between Norway and Sweden. As such, one of the two additions to the border agreement was about the Sami people. At that time, the Sami were referred to as Lapps, from which the document “Lappekodisillen” takes its name.

“Lappekodisillen” states how Norway and Sweden should divide the Sami-inhabited area between them and contains provisions on citizenship, taxation and the Sami’s right to carry reindeer across the border. Among other things, it says in paragraph ten: “Since the Lapps need the land of both kingdoms, according to old custom they should be allowed, autumn and spring, to move with their reindeer herds across the border into the other kingdom.”

To this day, the document is still used in the discussion about the rights of the Sami people.

King Harald continued his visit to Kautokeino on Wednesday when he attended the state opening of the Sami parliament. Crown Prince Haakon also attended the ceremony.