Saturday His Majesty King Harald and Her Majesty Queen Sonja of Norway dedicated theta third day in China to the conservation of cultural heritage. Their Majesties started their official state visit on Thursday, and on Friday, they visited, among many places, a kindergarten and a solar plant. On Saturday, it was time for history and culture when the royals visited the Mogao caves outside the city of Dunhuang.

“This was really fun,” said the Queen after visiting one of the 492 caves – which together contain 45,000 square metres of murals and more than 2,000 sculptures. The Queen knows much about the unique art collection and shared her knowledge when she met the Norwegian press after the tour.

“There was a monk who got a sight from Buddha, who came down from the top of a mountain here. He thought he received a sign that he should settle down right here, meditate and find a way to worship. He began to chop out and was the first to do so out here. It is just fascinating. Therefore, many others have continued for hundreds of years”, said Her Majesty.

“Each cave is a masterpiece. There are great artists who have been here,” said Queen Sonja. 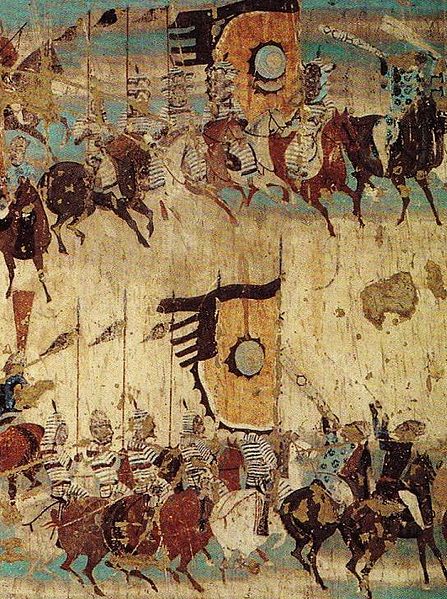 The caves are found on the UNESCO World Heritage Site, and hosts one of the world’s largest collections of Buddhist art. Tourism is Dunhuang’s most important industry, and the city is committed to the sustainable development of the sector. Once, Dunhuang was an important stopover for trade travellers along Silkeveien. Today, many tourists and royals find their way there.

Cultural exchanges and cross-border contacts are central, and in 2016, the Dunhuang International Cultural Expo Cultural Festival was established as an annual event with a special emphasis on culture and the countries along the Old Silk Road.

It was on Thursday that the King and Queen arrived in China. On Friday, they visited a kindergarten and a sun-energetic facility in the desert.