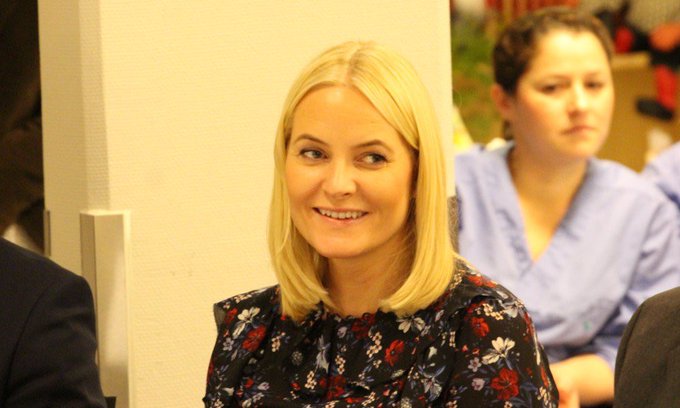 Mette-Marit Tjessem Høiby was born on 19 August 1973 in Kristiansand, an area in the southern part of Norway. Her parents are Sven Høiby and Marit Tjessem, and she has three siblings: sister Kristin Høiby Bjørnøy and brothers Per Høiby and Espen Høiby. Her father once worked as a journalist though he went through a period of unemployment, and her mother was a former bank teller.

Her parents divorced, and her mother later remarried in 1994. Mette-Marit gained a stepbrother from this marriage, Trond Bernsten, a police officer and security guard who died in the domestic terrorist attack on 22 July 2011. Mette-Marit grew up in Kristiansand but spent most weekends in Setesdal on the lake, where she learned to sail and became an avid outdoorswoman.

Mette-Marit began her schooling at the Oddernes upper secondary school. In 1994, Mette-Marit attended the Kristiansand Katedralskole where she had spent a year abroad in Australia during her time there, studying at the Wangaratta High School, through the Youth for Understanding Programme.

Mette-Marit also attended the Bjørknes Private School, and in 1997 took preliminary university examinations and the examinations for chemistry and information technology at Agder University College. At the University of Oslo, she studied ethics from 2000-2002 at the Faculty of Social Science and Faculty of Humanities.

Her education continued in 2003 when the now-Crown Princess took courses at the School of Oriental and African Studies at the University of London (sitting for examinations in HIV/AIDS and Development, The Global Refugee Crisis, Theories of Development and Development Experience). In 2008, she started taking classes at the BI Norwegian School of Management and graduated with a Masters of Management in 2012.

Mette-Marit has since revealed in interviews that she was rebellious in her early years, and it took her six years as a part-time student to complete her secondary education. During that time, she worked at the Cafè Engebret in Oslo as a waitress.

Controversy and Romance with a Prince

Mette-Marit first met Crown Prince Haakon of Norway at the Quart Festival, a large music festival held in her hometown, in the late ‘90s, though they did not begin dating until a few years later when they met again in 1999 at a party for a later edition of the Quart Festival.

By this time, Mette-Marit was a single mother to Marius Borg Høiby, who was born on 13 January 1997, from a relationship with a man named Morten Borg.

After her engagement to Crown Prince Haakon was announced in December 2000, she became a very controversial public figure in Norway, with a reputation for partying, attending raves and drug abuse, though she did not admit to personal drug use. Support for the monarchy at the time reached a serious low, although a majority of Norwegians still considered themselves in support of the institution.

The couple were also criticised for living together in an apartment before marriage, along with Marius, by the Church of Norway.

Their wedding was set for 25 August 2011, and a week prior, Mette-Marit participated in a tearful press conference to discuss her controversial past. “My youth rebellion was much stronger than many others. That resulted in me living quite a wild life.”

Mette-Marit also said, “I would like to take this opportunity to say that I condemn drugs… I hope that I can now avoid talking more about my past and that the press will respect this wish.” Following the press conference, 40% of those polled said they had a better opinion of her, and 84% believed that she was truthful about her past. She is now a much-beloved member of the Norwegian Royal Family.

On 25 August 2001, Crown Prince Haakon and Crown Princess Mette-Marit were married at the Oslo Cathedral. Her engagement ring was the same ring used by King Harald and King Olav to propose to their respective wives.

Her wedding dress evoked similar design elements to Queen Maud’s style and was designed by Ove Harder Finseth. The dress was made of white silk crepe and the skirt transitioned into a two-foot train. She carried a cascading bouquet and wore the Daisy Tiara in her hair, anchoring the 20-foot veil.

The presiding bishop, Gunnar Stålsett, said about the couple, “You have not chosen the easiest path, but love has triumphed.”

As the Crown Princess of Norway, Mette-Marit has focused her platform on literacy, health, HIV/AIDS awareness, youth, climate change, oceans and the environment.

On 21 January 2004, Mette-Marit gave birth to a daughter, Princess Ingrid Alexandra, who will one day be the first queen regnant of Norway. On 3 December 2005, she gave birth to son Prince Sverre Magnus. Her older son, Marius, lived with the Crown Prince Couple throughout his youth but made the decision to live as a private individual in 2017 and does not undertake any public role outside of joining the family at special occasions.

In 2018, Mette-Marit was diagnosed with pulmonary fibrosis, a condition that affects the lungs over time. After the Royal House announced her diagnosis, it was revealed that Mette-Marit’s official engagements would be dependent on her health and medical treatment and that she would be treated at the Oslo University Hospital.

Mette-Marit is also a patron of the Crown Prince and Crown Princess’s Foundation, and her projects under the umbrella of their foundation support youth at risk. The foundation’s aim, as outlined by the Royal House website, is as follows: “We want a Norway consisting of people who are confident that they are good enough as they are – people with the courage to lift up others because they once experienced to be seen themselves. Youth is the most important resource we have. We need their courage, creativity and hope for the future, in order to solve the large and complex challenges the world is facing. Our task is to facilitate so that each young individual can learn and build on their potential.”

Mette-Marit has also represented Norway on visits throughout the country and around the world on behalf of King Harald. She has been the Special Representative for UNAIDS since 2006 and has visited Ukraine, Mali and Nicaragua in this capacity, and has attended the International AIDS Conference as head of the Norwegian delegation.

Mette-Marit is a Young Global Leader with the World Economic Forum and is a member of the International Foundation Board of the Global Shapers Community. She is also a co-founder of the Maverick Collective that “aims to engage other women to use their voice, intellectual and financial resources, to improve women’s health worldwide and help end extreme poverty.”

To promote literacy, Mette-Marit also undertakes engagements aboard a train throughout Norway called the literary train tour, which is supported by Norwegian State Railways and the Oslo Public Library. She arranges meetings and events with local authors as the train stops throughout the country and invites people aboard to read and enjoy beverages. The books are provided by the Oslo Public Library and from Mette-Marit’s personal collection.