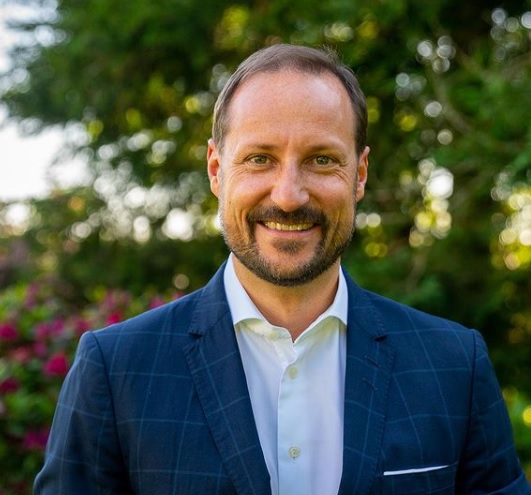 During the visit His Royal Highness said: “It is very nice to be back again at Stovner. I have met many committed young people who in various ways contribute to society. The coronavirus guide set up and the way they have used their skills, such as language competence, to reach all groups with good information, up-to-date information. That is great.”

Crown Prince Haakon met with young guides outside Stovner centre, with face masks and reflective vests. Since November last year, they have been scattered throughout the district, at the centre, at the district’s metro stations and grocery stores. The guides have handed out facemasks and hand sanitizer and given a reminder of the infection control rules. The district of Stovner was the first to employ local youth as guides in Oslo. It has given good results. Other districts and municipalities have installed the same. A total of 80 guides between the ages of 18 and 24 have been employed.

The district of Stovner has been particularly hard hit by the pandemic. At Nedre Fossum farm, the Crown Prince spoke with representatives of the district about the coronavirus situation, about what they have learned along the way and how the situation is now. Following the talks Crown Prince Haakon went for a walk in the Fossumsletta housing area together with the leader of the Stovner district committee, Rashid Nawaz, and mayor of Oslo Marianne Borgen. At one of the apartment buildings, the Crown Prince sat down for a conversation with four committed young people in the district.

Crown Prince Haakon also met employees at “Fixit”, a job and activity offer for people with drug abuse challenges. They had been responsible for the decoration and hospitality provided for the Crown Prince at Nedre Fossum farm. After Nedre Fossum farm, the trip continued to Fossum church. On the stairs outside the church, kindergarten children from the district stood lined up. They welcomed the Crown Prince with two songs.

At the entrance to Stovner volunteer centre the visit was concluded. The Crown Prince was served coffee and waffles by employees and volunteers who also gave a brief introduction to their information work during the pandemic.