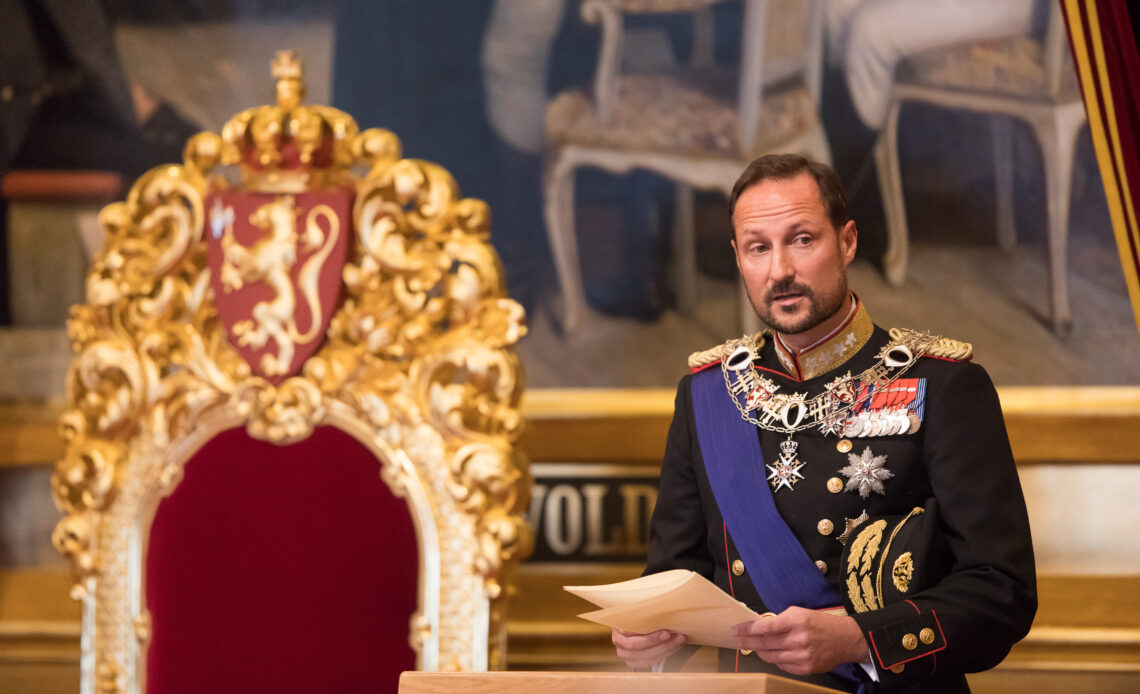 Today is a historic day for the Norwegian people. For the first time in 30 years, the solemn and traditional opening of the Norwegian Parliament has been made by a crown prince and not the king of the nation. In a shortened ceremony, due to the pandemic, Crown Prince Haakon opened the 156th session of the Storting, the Norwegian parliament. Queen Sonja was also present during the ceremony.

On September 25th 2020, it was announced that King Harald had been admitted to hospital in Oslo. The Norwegian Royal Family later confirmed it was because the King was having breathing difficulties. Covid-19 was ruled out after tests, and on Friday evening, the Royal Court released an update on the King’s health. They confirmed that the King was to be in hospital over the weekend and on sick leave until 4 October. This is the reason why King Harald did not open parliament this year.

The last time a crown prince opened the Storting was in 1990. Then, it was King Harald who opened the parliament as Crown Prince. His father, King Olav V, was then seriously ill and died only a few months later.

There was great excitement about whether Crown Prince Haakon would make the opening sitting on his Crown Prince’s throne or whether he will use the Norwegian Monarch’s throne, as he is the regent in his father’s absence. The Crown Prince ended up sitting on the King’s throne. It was also the first since 1990 that only two and not three thrones were placed in the parliament hall.

The ceremony began when Crown Prince Haakon and Queen Sonja left the Royal Palace. Escorted by police and soldiers, they travelled by car down the parade street to the parliament. Usually, several hundred soldiers are lined up as a guard of honour, but due to the COVID-19 danger, only a few soldiers attended. Some spectators had lined up to watch, but significantly fewer than usual.

The royals were then welcomed by a small selection of parliamentary representatives and led up to the parliament hall. Usually, everyone in the hall is singing the royal anthem and the national anthem, but this year the songs were sung by soloists from the Oslo Choir. The President of Parliament gave a speech and a member of the government also gave a speech. From the government, only nine ministers attended, and the Minister for Development is in quarantine after having been exposed to someone who tested positive for the virus. Crown Prince Haakon then gave the throne speech. The Crown Prince said, among other things: “I welcome the Storting to responsible work and wish that it will be to the benefit of the fatherland. I ask God to bless the work of the Storting and declare Norway’s 165th Storting open.”

After the ceremony, the royals were escorted out of the Storting and returned to the palace. According to Norwegian law, parliament cannot conduct negotiations while a functioning monarch is in the building. According to tradition, the representatives were, therefore, locked inside the hall from the time the Crown Prince Regent arrived until he left. Only after a signal had been given that the Crown Prince had left the building did the Speaker of the Parliament declare the meeting legally dissolved and the representatives could leave the hall.

The main hall of Storting changes significantly during the official opening. At other times in the year, the hall consists of 169 chairs for the representatives in a semicircle around a large podium, a smaller podium and two debate chairs. This is removed when the royals attend parliament and is replaced with the Norwegian throne, as well as two smaller chairs for the Queen and the Crown Prince. The Storting’s president and the secretary have a separate desk in front of the throne so that all chairs are facing the throne.

Crown Princess Mette-Marit does not attend the State Opening nor does Princess Ingrid Alexandra, who will one day become Norway’s queen. This is a practice that has been changing over the years. King Olav was a widower for many years and only participated with his son when the Storting was opened. When King Olav died in 1991, King Harald wanted the Queen to attend the ceremony. In the future, when Crown Prince Haakon becomes Norway’s King, then it is likely that Mette-Marit will also attend the ceremony, as will Princess Ingrid Alexandra.