On Sunday, His Royal Highness Crown Prince Haakon of Norway attended a ceremony to honour fallen Norwegians from the First World War. The ceremony started at 11.00 with a music performance by the naval music corps before Stavern Men’s Choir sang the “Navy Hymn”. Then, Defence  Minister, Frank Bakke-Jensen held a short speech. Bakke-Jensen said:

“His Royal Highness the Crown Prince Regent then put down a wreath in the Sailors memory hall in the city of Stavern in Southern Norway. The ceremony was concluded with Kristine Emilie Krüger who played the sonata of Bach on the violin and the man’s choir who sang “The Norwegian sailor”. 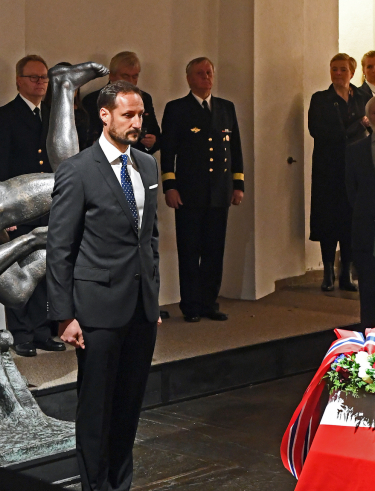 When the Austrian Franz Ferdinand was murdered, the event did not raise any particular concern in Norway. Only after Austria-Hungary’s war letter to Serbia on 28 July, one began to notice the panic. From 31 July, there was great turmoil on the stock exchanges, and grain prices shook violently in the weather. Large crowds stood outside the Bank in Kristiania to exchange ther banknotes in gold. There were hamstring food and other items in the stores. King Christian X of Denmark, King Gustaf V of Sweden and King Haakon VII of Norway then attended a common peace-conference in Malmö where they all declared their nations neutral in the war.

Norway did not take part in the First World War. Nevertheless, many Norwegian sailors lost their lives because ships in the merchant fleet were attacked by the warring parties. In the crypt of the Sailors Memory Hall, there are eleven copper plates with the names of 1892 Norwegian seamen who lost their lives during World War I. 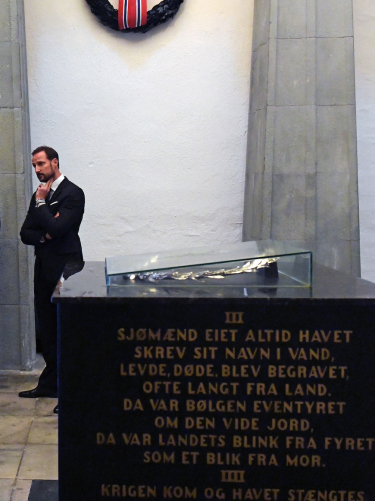 The Crown Prince next to the monument dedicated to the fallen Norwegian sailors. Photo: Sven Gj. Gjeruldsen / Det Kongelige Hoff / The Royal Court

Norway is sometimes referred to as “The Neutral Ally”. During World War I, while theoretically a neutral country, British pressure and anti-German sentiment in the population prompted the government to favour Britain highly in relation to Norway’s large shipping fleet and vast fish supplies.

The Norwegian Sailors Hall of Remembrance is a national memorial commissioned by the Norwegian Parliament after World War I to commemorate the fallen Norwegian sailors of the war. It was unveiled by King Haakon VII in 1926. The hall is visited by 20.000 people every year.