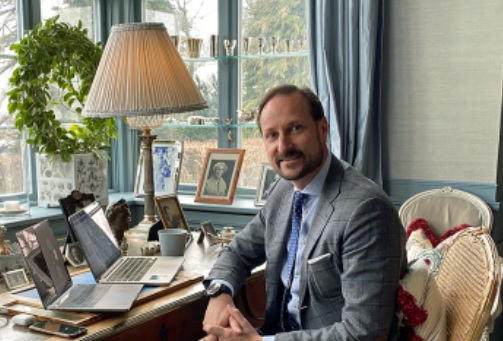 Crown Prince Haakon has, over the last few weeks, held several video conferences and video meetings with the authorities and other occupations who are heavily affected by the coronavirus. On Tuesday, the Crown Prince was briefed via video on the working life of three cleaners during the COVID-19 pandemic.

His Royal Highness started the conference by saying: “The work you do in hospitals, in grocery stores and around the community is incredibly important, every day, but especially now with the virus outbreak we have in Norway and around the world. You and all other cleaners are now doing a job that means we can have better control of this situation than we would otherwise have.”

The video conference was hosted by the Crown Prince from his royal estate of Skaugum, while the cleaners, Naemy Trandum Aasen sat in Kongsberg; Felicia McGill Chepas in Trondheim; and Angus McGunnigle in Oslo. The three cleaners are essential personnel as they make sure people are clean and not contagious. Due to cleaners, hospitals can remain open to the public during this crisis.

The Crown Prince also asked them several questions to learn more about how the cleaners are affected by the coronavirus situation. The Crown Prince expressed his gratitude and told how much he appreciated the work that was done. Crown Prince Haakon said among other things: “You have a critical function in our society. Thank you for the important work you and all the cleaners do in Norway”.

In recent times, all three have received courses in infection control. In Norway, cleaners have now been added to the list of the society’s critical occupations that must go on. This applies to cleaners who work in companies with a critical function.

At the end of the meeting, Trine Wiig Hagen in the Norwegian Workers’ Union briefed His Royal Highness on the work being done on training its members to handle difficulties related to the virus. The Norwegian Workers’ Union is the trade union that organises most cleaners in the private sector in Norway. She told the Crown Prince that many members are concerned about layoffs and unemployment in these times.

Norway has seen a stabilisation in the number of new patients and believes that they are now starting on their way to fighting the virus, although it is known that this will take a long time. Norway is now the Nordic nation with the most infected but still the fewest dead. As of 31 March 2020, Norway has reported 4,637 confirmed cases and 39 deaths.