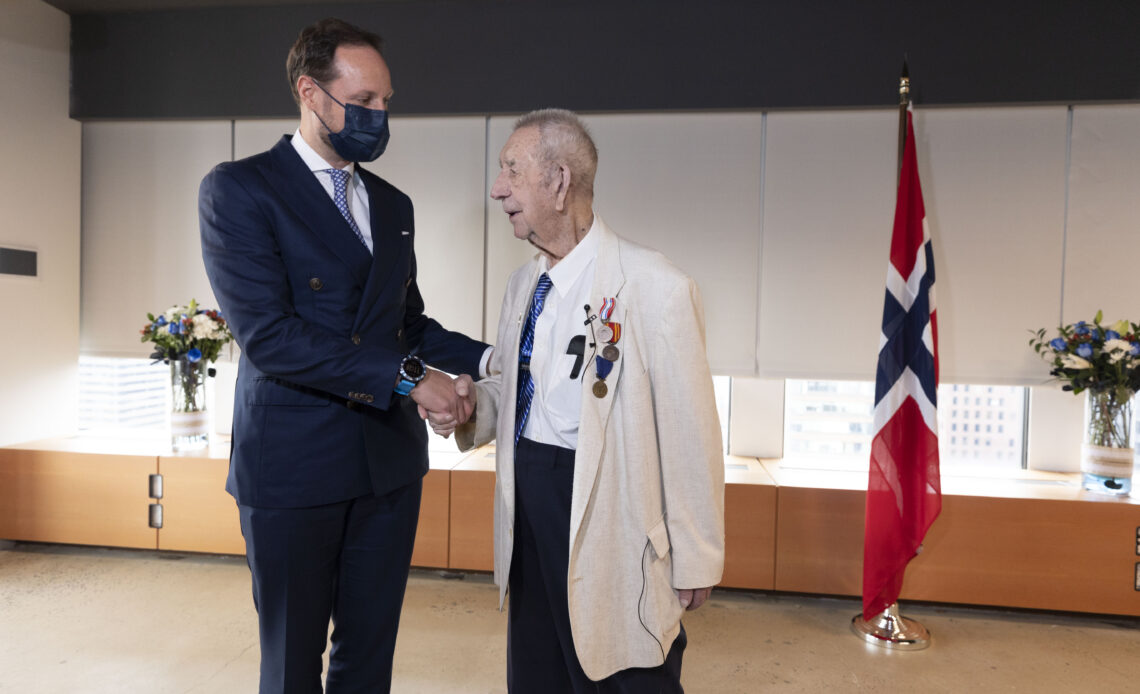 As Crown Prince Haakon of Norway began a four-day long journey to the United States, his diary was mostly filled with political meetings, but the Crown Prince also took time to honour one of the few Norwegian war heroes who are still alive.

During a solemn ceremony on the premises of the Norwegian General Consulate in New York, on December 6th 2021, the Crown Prince presented a medal to Karl Aksel Andresen, who was awarded the Participant Medal of 1940-1945 for his efforts as a war sailor during World War II. The medal is given in recognition of those who fought for Norway’s freedom during World War II.

Andresen sailed for Nortraship in the Norwegian fleet from 1940 to 1945, and served as a sailor and cook on board several Norwegian merchant vessels, including “M/S Skjelbred” when the vessel was torpedoed by a German submarine in September 1943. Everyone on board survived. After the war, Andresen settled in Brooklyn and started a family. Andresen is now the last surviving war sailor of many hundreds who settled in Brooklyn after the war. He has been president of the Norwegian War Sailors Association in Brooklyn until 2010.

A war sailor is a sailor who sails or has sailed during a war. The term has been used especially about Norwegian seafarers who sailed out on merchant ships during World War II and to a certain extent during World War I. These often sailed in convoys with military and civilian supplies to one of the warring parties and were under constant threat of being sunk by enemy bombers, torpedo boats and submarines. The Memorial Hall in Stavern was erected in memory of sailors who fell during war. In the hall, there are copper plates with the names of all Norwegian war sailors and foreigners who sailed for Norway, who died during the First and Second World Wars.

In recent years, the Norwegian royal family has participated in a number of events and medal ceremonies for this group of warriors. The war sailor was forgotten for many years, but in the last ten years they has been highlighted as an important contributor for Norway during the last world war.