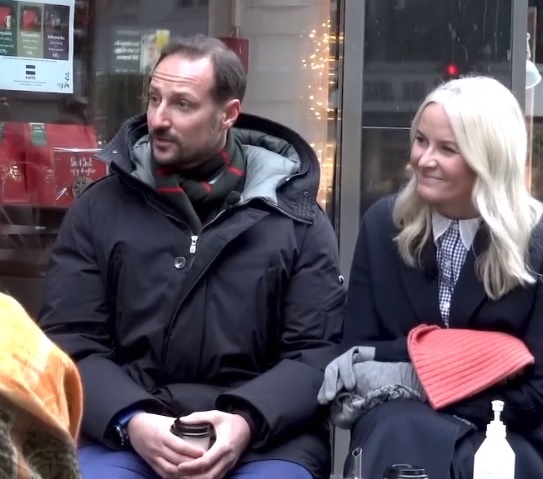 The Crown Prince Couple spoke with Red Cross personnel based all over Norway as they prepare for the Easter holidays. The Royal House notes that Crown Prince Haakon, who has been acting as regent for King Harald for most of the year so far, spoke with the leader of the Red Cross Auxiliary Corps to assess their readiness.

With that, Crown Prince Haakon opened the Easter emergency preparedness by saying “Good to know. You are making an incredibly great effort.”

During their visit, Crown Prince Haakon and Crown Princess Mette-Marit viewed the equipment available to the Red Cross for search and rescue missions—there are over 6,000 volunteer search and rescue crews in the country, and met with Ellinor Møller, Asker Red Cross Auxiliary Corps’ leader to talk about this year’s preparedness and answer questions about volunteers and joining the efforts.

“The work that the volunteers do—both now at Easter and all year round—is incredibly important,” said Crown Prince Haakon.

“It is safe to know that someone is ready to move out in search and rescue if needed. We can only hope that it will be a calm Easter this year and not too many emergencies. But it is very nice that the emergency preparedness is there, that it works, and that you are so good at working with it.”

The Norwegian Red Cross has over 10,000 volunteers across the country to aid in emergencies, and throughout the pandemic, have been talking with isolated or lonely people to ensure that they have someone to talk to.

Crown Princess Mette-Marit, who is patron of the Red Cross, thanked the volunteers and said that, “It is no secret that this will be a very difficult Easter for many. The fact that preparedness also exists for those who struggle through an Easter where there is less social contact – people are starting to get bored, they are tired, people are struggling mentally than before. I really appreciate that the Red Cross and other organizations are there for them as well.”

The Norwegian Red Cross has been holding Easter emergency preparedness events for over 100 years, back when mountain safety was a bigger issue over the Easter holidays. Over the ensuing century, they’ve pivoted their informational work and work in a variety of other safety areas.