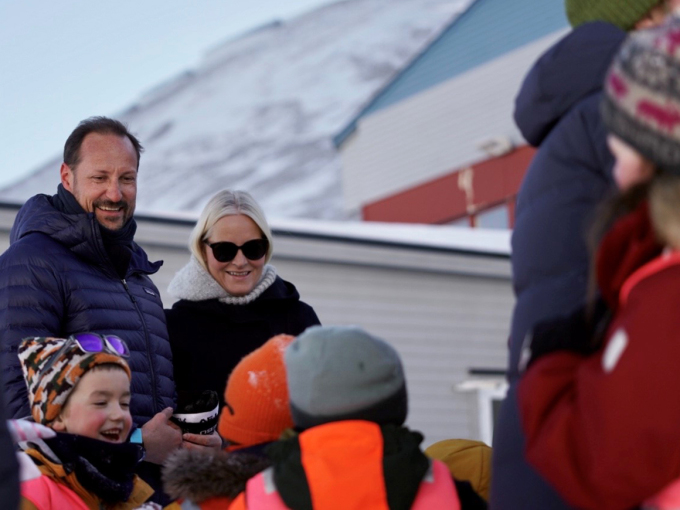 Crown Prince Haakon and Crown Princess Mette-Marit of Norway have visited Svalbard in the Norwegian Arctic.

The Crown Prince Couple were in Svalbard for three days beginning on 20 April when they were in Longyearbyen. On Wednesday, the couple visited the Longyearbyen Public Library, where they heard a presentation from the head of the Longyearbyen Community Council, Arild Olsen, regarding the Svalbard community.

Community service is important in Svalbard, and Their Royal Highnesses spoke to several people from the area who like to give back. Specifically, they talked to representatives from organisations that help out in times of crisis or organise events in the outdoors.

The future King and Queen of Norway also travelled to an embankment built Longyear Valley to help protect the area and its people from avalanches – an increasing threat to the area due to climate change. They next met with a new youth club and spoke to them about how they designed the premises themselves. The day concluded with a dinner hosted by Governor Lars Fause.

On Thursday, 21 April, the Crown Prince and Crown Princess met with children at Polarflokken Kindergarten and saw the playground built to protect the children from the chilly elements before visiting Longyearbyen School to watch a performance in the assembly hall.

Next, they travelled to Bolterdalen, where they met the Jordbrudal family, who operate a Husky kennel and teach others about dog sledging. It wasn’t long before Their Royal Highnesses took to the sledges themselves. That evening, they attended a reception at Svalbard Museum for those who they had met during their trip and those who assisted in its organisation.

During the reception, Crown Princess Mette-Marit said: “Haakon and I are very, very grateful to be back in Longyearbyen once again. “I think you who live here know how much the Royal Family enjoys visiting Svalbard. What strikes us each time we come is that this is a very special meeting place – even if it’s a bit off the beaten track.”

On the final day of their trip, climate change was the focus. Their Royal Highnesses visited the SvalSat satellite station, which is the most northern satellite station in the world. It collects data that helps with research on climate change. They received a tour of the station and learned more about the importance of meteorology while at the University Center on Svalbard.

Crown Prince Haakon also visited a coal mine, Mine 7, which will close in 2023 in an effort to focus more on sustainable energy. The Crown Prince spoke to the miners and heard what it is like to work in a mine.

Svalbard is an archipelago in the Arctic Ocean located between mainland Norway and the North Pole.