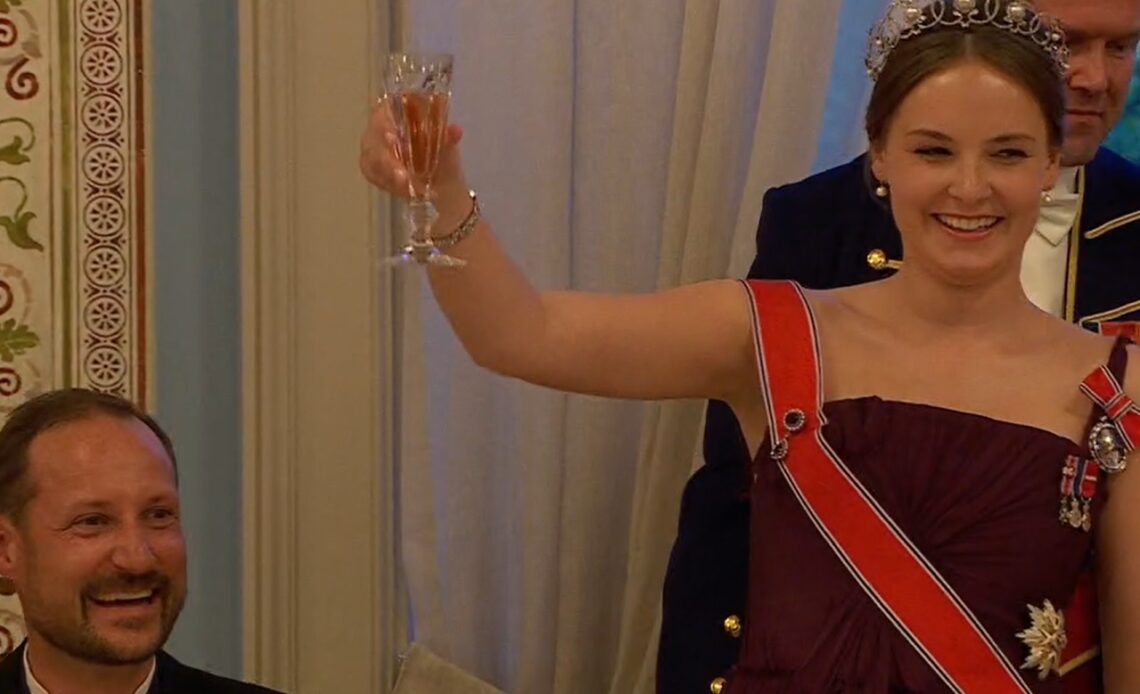 Norway was the setting for the largest royal gathering since pre-pandemic times when members of Europe’s royal families came together to celebrate the belated 18th birthday of Princess Ingrid Alexandra.

Amidst the historic nature of the event—Ingrid Alexandra will someday be Norway’s first queen regnant in centuries—the royal ladies wore their finest gowns and opened their jewel vaults, so let’s take a look at all the fashion on display.

The three future queens wore shades of pink and purple for their first official gala dinner.

Princess Ingrid Alexandra wore a deep purple Alberta Ferretti evening gown from her mother’s closet, which was previously worn in 2005 for the Japanese State Visit to Norway. Her tiara was a birthday present from her cousins, previously owned by the late Princess Ragnhild, who inherited it from their grandmother Princess Ingeborg of Sweden.

Ingrid Alexandra’s mother wore the frothy pink Emilio Pucci gown she wore in 2010 to Crown Princess Victoria’s wedding—this was one of Ingrid Alexandra’s first official events, having been a part of the bridal party as one of Victoria’s bridesmaids. She paired her pink gown with the Daisy Tiara.

Subdued in a navy and white evening gown, Ingrid Alexandra’s aunt wore a dress from her mother’s closet and her own 18th birthday tiara, which had been a gift from her late grandfather, King Olav.

Queen Sonja was the brightest guest in attendance, getting another chance to wear her lively yellow evening gown paired with elements of the Norwegian Emerald Parure.

The oldest of the future queens, Princess Elisabeth, made her official debut in a lilac modified Armani Privé evening gown with the sash and medal of the Knight Grand Cordon of the Order of Leopold, her highest Belgian Order.

Upon her head was a mysterious tiara with an unknown provenance. The Belgian Royal Family has yet to comment on the origins of Princess Elisabeth’s tiara.

Queen Mathilde also wore Armani Privé for Ingrid Alexandra’s gala dinner, contrasting her daughter’s lovely lilac gown with a draped dress in a deep blue and the Wolfers Tiara, one of the few tiaras within the Belgian Royal Family exclusively worn by queens.

Princess Amalia, who turned 18 last December—and who is a noted jewellery maven—finally had the chance to wear a tiara and chose one with a special significance: the Star Button Tiara that her mother wore on her 2002 wedding day.

Princess Amalia wore a caped pink gown to the gala dinner, likely by Natan, one of her mother’s favourite designers, and paired it with the sash of the Knight Grand Cross of the Order of the Netherlands Lion.

Much like her fashionista daughter, Queen Maxima showed up in a fabulous gown and fabulous jewels to match. The Dutch queen stunned in shades of red in a gown by Jan Taminiau paired with the Stuart Tiara, one of the most magnificent tiaras belonging to any royal family in Europe.

Just because she was too young to wear a tiara didn’t mean the ten-year-old future queen of Sweden was going to miss out on the glam. Princess Estelle paired her soft blue dress with a floral headband, echoing the floral elements of her mother’s evening gown.

Crown Princess Victoria, one of Ingrid Alexandra’s godmothers, wore a floral-inspired ballgown by Frida Jonsvens and paired it with the Laurel Wreath Tiara, echoing her daughter’s floral headband.

Crown Princess Mary stunned in a white evening gown with cap sleeves and intricate blue patterns wrapping around the waist and trailing down the gown. Her dress was designed by one of her favourite designers, Ole Lynggaard, and paired with the Midnight Tiara—one that Mary doesn’t own but has exclusive use of.

Princess Stéphanie, like the rest of the women in the Luxembourg Grand Ducal Family, is a big supporter of Elie Saab and wore a Grecian-inspired pale green evening gown with Grand Duchess Marie Adelaide’s Sapphire.