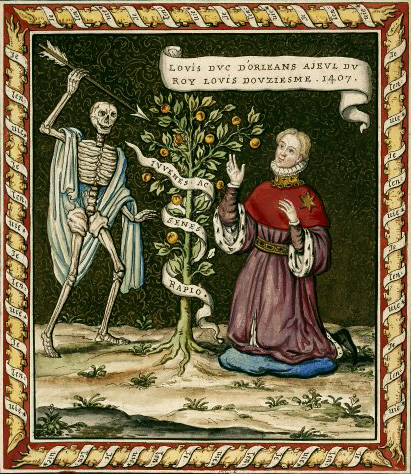 Louis de Valois had a close relationship with his older brother, who had become the King of France by the age of twelve. Louis was intelligent and relatively well educated and thrived in the shadow of his brother.

In 1374, Louis was betrothed to Catherine, heir presumptive to the throne of Hungary. Louis and Catherine were expected to reign either over Hungary or over Poland, as Catherine’s father, Louis I of Hungary, had no sons. Catherine’s father also planned to leave them his claim to the Crown of Naples and the County of Provence. After several unforeseen events, the marriage did not materialise, and Louis had to look further away for his Hungarian and Polish royal crown. Instead, he married Valentina Visconti of Milan.

In his marriage to Valentina Visconti of Milan, Louis de Valois had five sons and three daughters. Of these, his son Karl was the most notable. With Mariette d’Enghien, his mistress, Louis had an illegitimate son.

In 1404, Prince Louis was made regent of France as his brother became too ill to rule as monarch; his older brother, King Charles, may have had schizophrenia or a bipolar disorder. Louis de Valois imposed many new taxes on the people, which were wasted on luxuries, thereby provoking great dissatisfaction.

At the head of the dissatisfied stood the Prince’s nephew, Duke Johan of Burgundy. Duke Johan, also called John the Fearless, ruled the Burgundian State from 1404 until his death in 1419. He played a crucial role in French national affairs during the early 15th century, particularly in the struggles in the Hundred Years’ War with England. He is known for being a rash, ruthless and unscrupulous politician.

Duke Johan murdered his uncle by stabbing him with a knife, together with 15 masked men led by the mercenary Raoulet d’Anquetonville. The murder took place when Prince Louis de Valois mounted his horse in Paris in broad daylight.

Louis de Valois’s unarmed servants and companions were unable to protect him. One of his servants tried to stop the attackers and was himself mortally wounded and died days later. Another had life-threatening injuries. The involvement in the murder by Duke Johan the Fearless of Burgundy prompted him and his sons to seek an alliance with the English, thereby bringing the Hundred Years’ War to its final phase.

Louis’s murder sparked a bloody feud and civil war between Burgundy and the French Royal Family, which divided France for the next twenty-eight years. The Armagnac-Burgundian Civil War was a conflict between two cadet branches of the French Royal Family; the war ended with the Treaty of Arras in 1435 where the branches of Armagnac and Burgundian reconciled. In 1498, the heirs of Prince Louis de Valois, Duke of Orleans inherited the French throne after the extinction of the Valois main line.