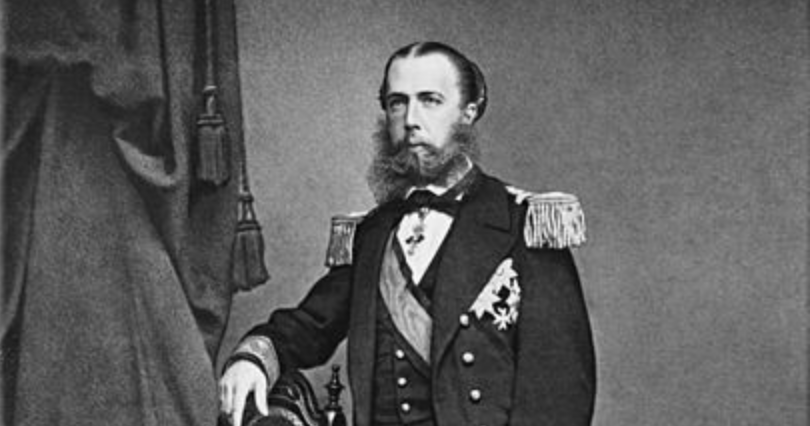 By Original glass negative (LC-BH824-4754) made by Andrew Burgess, one of Mathew Brady's operators, on a trip to Mexico City. - This image is available from the United States Library of Congress's Prints and Photographs divisionunder the digital ID cph.3a16880.This tag does not indicate the copyright status of the attached work. A normal copyright tag is still required. See Commons:Licensing for more information., Public Domain, Wikimedia Commons

The Austrian Prince Maximilian was born in 1832 as the son of Archduke Franz Karl of Austria and Princess Sophie of Bavaria. He grew up in safe surroundings in Austria and pursued a career in the Austrian Navy. Following his career, he became a close friend of Emperor Napoleon III of France.

Maximilian was encouraged by Napoleon III to become Emperor of Mexico following the French intervention in the North American country. Prince Maximilian accepted the Emperor’s offer and arrived in Mexico in May 1864, which meant the establishment of the Second Mexican Empire.

In 1864, Maximilian declared a political amnesty for all liberals who wished to join the Empire. His priorities included reforming his ministries and reforming the Imperial Mexican Army, the latter of which was impeded upon by Bazaine to consolidate French control of the nation. As Emperor of Mexico, Maximilian faced significant opposition from forces loyal to the deposed President Benito Juárez throughout his reign.

In January 1866, seeing the war as unwinnable, Napoleon declared to the French Chambers that he intended to withdraw the French military from Mexico. Maximilian’s request for more aid or at least a delay in troop withdrawals was denied. The Second Mexican Empire collapsed after Napoleon withdrew French troops in 1866.

On the morning of 16 May 1867, Maximilian was captured after a failed escape attempt from Mexico. Following a court-martial, he was sentenced to death. Many of the crowned heads of Europe and other prominent figures sent telegrams and letters to Mexico pleading desperately for the Emperor’s life to be spared.

The sentence was carried out in the Cerro de las Campanas at 6:40 a.m. on the morning of 19 June 1867, when Maximilian, along with Generals Miramón and Mejía, was executed by a firing squad. He spoke only in Spanish and gave each of his executioners a gold coin not to shoot him in the head so that his mother could see his face. His last words were, “I forgive everyone, and I ask everyone to forgive me. May my blood, which is about to be shed, be for the good of the country. Viva Mexico, Viva la Independencia!”

After his execution, Maximilian’s body was embalmed and displayed in Mexico. Early the following year, the Austrian Admiral Wilhelm von Tegetthoff was sent to Mexico aboard SMS Novara to take the former Emperor’s body back to Austria. The coffin was taken to Vienna and placed within the Imperial Crypt.