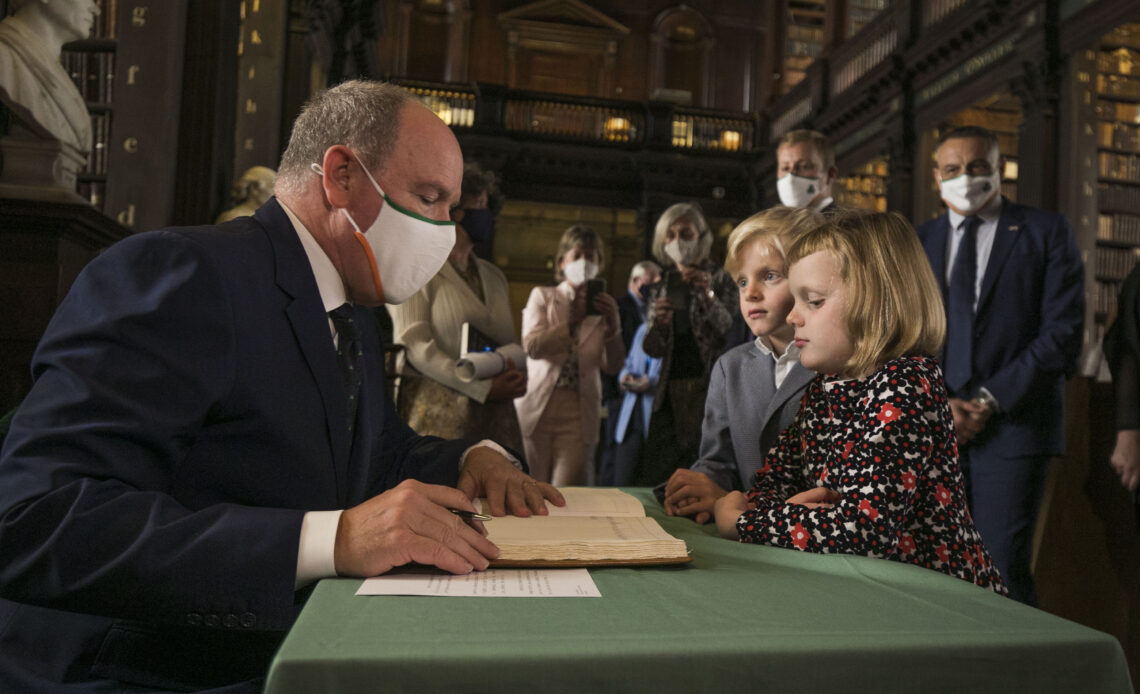 Prince Albert of Monaco has taken his six-year-old twins, Princess Gabriella and Prince Jacques, on their first trip to Ireland – his ancestral home.

His wife, Princess Charlene, is still in South Africa, where a severe ear, nose and throat infection has prevented her from flying home. She was recently hospitalised but has since been released and is in stable condition.

His visit began with a meeting with Irish President Michael D Higgins and his wife Sabina Higgins at the presidential residence before he headed to Trinity College Dublin.

The Prince took his children to visit Trinity College Dublin, where he donated €1 million to a new €90 million restoration of the school’s library. His Serene Highness unveiled two friezes at the college – one on the University’s Benefactors Wall at the entrance of the dining hall that featured his and his wife’s names while the other is located in the library featuring the Prince’s name on the Gallery of the Long Room of the Old Library alongside the names of the founding donors.

Librarian & College Archivist, Helen Shenton, thanked the Prince for his donation, remarking: “The evolution of the Library of Trinity College has been made possible over the centuries by visionary benefactors who understood the importance of the Library for Ireland and for the advancement of scholarship, culture and civilisation. The Old Library Redevelopment Project will be using leading technology and preventive conservation, providing optimum environmental conditions for the 18th-century building and its precious collections.  With this ambitious conservation programme, we are ensuring that future generations will continue to benefit from it and be inspired. It will be accessible to all, our scholars and public in an historic building reinterpreted for the 21st century.”

Prince Albert was also shown the famous Book of Kells, which is a ninth-century Latin gospel manuscript written by Columban monks. The book is known across the globe and was created around 800 A.D. It features four books from the New Testament with other texts and tables. Additionally, His Serene Highness was given the opportunity to view items from the library’s extensive collection related to the work of his great-grandfather, Prince Albert I. This included copies of the earliest treatises on oceanography from the 18th century that is contained in the Dutch Fagel Collection. Prince Albert I was a keen oceanographer and explorer and reigned over Monaco from 1889 until his death in 1922.

About the visit, Provost & President, Professor Linda Doyle, said: “We are delighted to welcome Prince Albert II to Trinity College Dublin. His visit builds on Trinity’s existing links with Monaco through the Princess Grace Irish Library and our Centre for War Studies. Prince Albert joins a tradition of philanthropy that dates from the establishment of the University in 1592. On behalf of the Trinity community, I would like to thank Prince Albert for his support of this landmark restoration project which will ensure the preservation of the Old Library, as a global cultural icon for Trinity, the city of Dublin and Ireland.”

The Prince said: “It is with great pleasure that through this donation I follow in the footsteps of my mother who had a deep affection for Ireland and signals the link to Princess Charlene’s forebears who were instrumental to the founding of Trinity. It is a great privilege for me − with this benefaction – to be part of this ambitious programme to conserve the 18th century Old Library building, creating a sustainable protective environment for the many extraordinary treasures it holds for Ireland and the world.”

Albert’s Irish roots are from his mother, American actress Grace Kelly who became the Princess of Monaco upon her marriage to Prince Rainier in the 1950s. Her grandfather, John Peter Kelly, was from Ireland and the late princess visited Ireland several times in her life before her untimely death in a car crash in 1982.