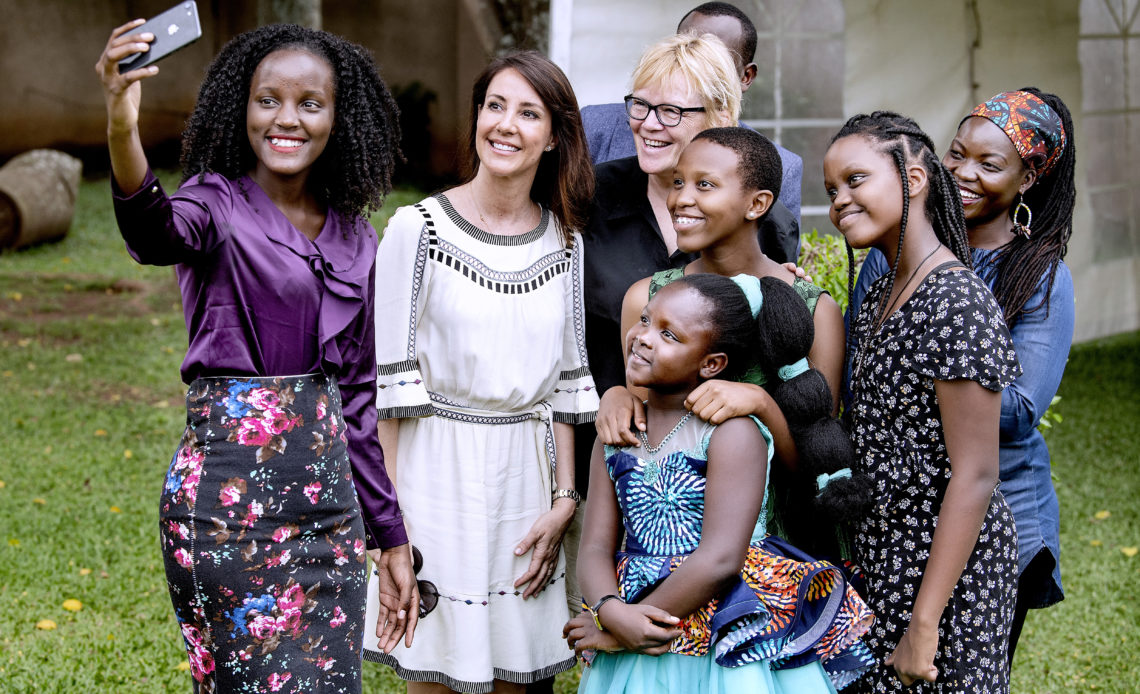 On 29 February, Princess Marie met with young climate activist, Vanessa Nakate during her humanitarian trip to Uganda as Patron of DanChurchAid. Vanessa Nakate called out the Associated Press when she was cropped out of a photo with other young climate activists including Greta Thunberg at the Davos Economic Forum last January. About the scandal, Princess Marie said: “I thought it was really stupid. I can’t imagine it was made on purpose, but they should have thought about it. I can tell you we heard about you, we heard your voice, we heard about you and you have a strong voice”.

During the meeting, Princess Marie also met other young climate activists Leyna, Bonita, and Karen. Leyna, who is eight-years-old, sang a song for the Princess. Bonita, who is 15-years-old, gifted Princess Marie two children books she wore about climate change with the first chapter being appropriately titled ‘A Royal Friendship’. Karen, 11, read a poem titled ‘My Beautiful Field’ which is about her beautiful field who is going to disappear because of climate change. At the end of the poem, Karen says, “You and I will probably find a solution,” which made Princess Marie very emotional. Princess Marie, Vanessa, Leyna, Bonita and Karen also planted a mango tree that Princess Marie was gifted the day before.

About her meeting with Princess Marie, Vanessa Nakate said: “The Princess told me she thought it was really unfair that I was cut out, and it was very, very good for me to hear that someone like her actually knew I existed. She also told me that I was very powerful and very inspiring regardless of what had happened.”

After the meeting, Princess Marie attended an official reception hosted by the Danish Ambassador to Uganda Nikolaj A. Hejberg Petersen in his official residence.

On 1 March, Princess Marie attended her last official event in Uganda as she met with the Uganda Women Network which works with DanChurchAid to provide education for women with the aim of educating and supporting women’s opportunities to participate in both local and national political work.

She also talked about how climate change has a huge impact in Uganda: “Climate change is all around the world, you know, it’s affecting everybody. The only thing I can tell you is, coming here I really saw the impact, especially for the farmers. You never know when it’s going to rain, you can’t know when you harvest, you can’t plan anything. This is a matter of life and death, you need to be able to eat. I think this is a problem all around the world, but here it’s a problem that we need to address today.”

Princess Marie then flew back to Paris to get back to her children who she ‘missed very much,’ as she told members of the Danish media present in Uganda with her. She also admitted that she was a little bit scared by the reports on the coronavirus that she had been hearing from Denmark and France, especially as the threat grew more serious in France and some schools were closed.