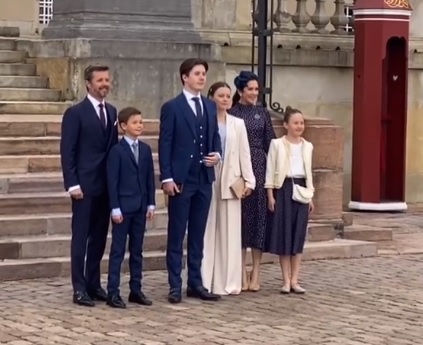 As Prince Christian of Denmark was confirmed into the Danish church, there was huge press and public interest. But as the many photos and videos were played out, one involving his younger sister, Princess Isabella, got many people talking.

Reporters captured a terse moment between Isabella and her mum, Crown Princess Mary. The 14-year-old princess made a comment to her mother which has made headlines in the Danish press. Isabella was initially told to follow her grandmother,Queen Margrethe, up the stairs, but when she was halfway up the stairs, the counter-message came from Crown Princess Mary. She had to come back for more pictures. The clearly annoyed princess hit back at her mother, with the words: “Did not you say I should go with Grandma? Are you completely confused?”

The clip of the incident has now gone viral, after it was shared online by most media in Denmark and around Europe. The Danes seem to enjoy themselves at the expense of the royal family, and several point out that they seem like a normal family with teenagers in the house. Royal House expert, Lars Hovbakke, told the Danish magazine “Ekstra Bladet” that it is very natural that the clip has gone viral in the last 24 hours. He also adds that Christian and Isabella are very different. He says: “She is different from Prince Christian, as he is the more correct, and he is also raised to be even more correct, since he will one day become king. They complement each other very well, since they are so different when they perform in public. People can like that.”