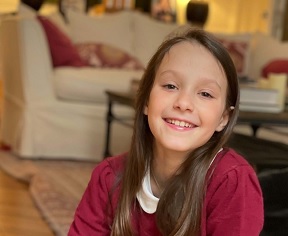 Princess Athena of Denmark is celebrating her 10th birthday today.

As is tradition, the Danish Royal House has released new photos of the young royal to mark the occasion. The photographs were taken by her mother, Princess Marie..

Princess Athena is the younger child of Prince Joachim and Princess Marie of Denmark. She has one older brother, Prince Henrik and two older half-brothers, Prince Nikolai and Prince Felix, from her father’s first marriage.

She is the youngest grandchild of Queen Margrethe and the late Prince Henrik and is tenth in the line of succession to the Danish throne.

Athena currently resides in Paris, France, with her family, where her father works as a Military Attaché at the Royal Danish Embassy.

She attends the private school EIB Monceau alongside her brother.

Living in France provides Athena and Henrik with the opportunity to learn more about where their French mother grew up. Their late grandfather, Prince Henrik, was also French-born.