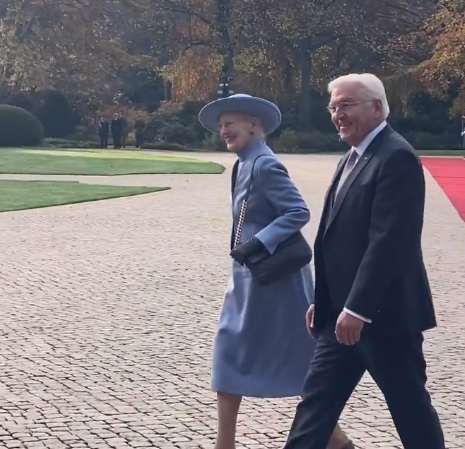 Queen Margrethe of Denmark is in full swing with her state visit to Germany, where business and culture were on the agenda during the second day of the visit. The visit is currently taking place in the German capital, Berlin, where both the Danish Queen and Crown Prince are present, after which the Queen alone continues the visit to the state of Bavaria, and its capital, Munich.

On November 11th 2021, Queen Margrethe and Crown Prince Frederik participated in the opening of the Danish-German business conference. The conference took place in Kosmos, which opened in 1961 as the country’s most modern film theater. Ten years after the fall of the Berlin Wall, the building underwent an extensive modernization and today is a well known conference center.

Queen Margrethe gave the opening speech at the conference, saying: “The Crown Prince and I are delighted to be here in Berlin today for the opening of this important trade conference, which represents a milestone in our aspiring partnership within the areas of sustainable energy, food, and health”.

Together with the German Foreign Minister and Germany’s acting Federal Minister for Food and Agriculture, the Crown Prince attended the signing of the Memorandums of Understanding on ​​future cooperation between Danish and German companies and authorities. His Royal Highness subsequently participated in a number of activities in connection with the business conference. Crown Prince Frederik also visited the three sector tracks: the energy track, the health track and the food track, and in this connection greeted a number of representatives from the business organizations.

The Queen also visited the Barenboim-Said-Akademie Conservatory of Music, which offers bachelor’s degrees and diplomas in music. The visit marks the start of a new four-year collaboration agreement between the Danish Art Fund and Pierre Boulez Saal. The Queen subsequently visited the Litteraturhaus Berlin, a public institution whose purpose is to promote culture and literature in Berlin.

During the visit, Her Majesty attended a lecture on Herman Bang’s significance for Danish, German and European literature and in this connection unveiled a memorial plaque to the author. In the afternoon, the Crown Prince, accompanied by the Minister of Culture, visited the AEDES Architecture Forum, which is a world-renowned, independent institution and exhibition venue for international dissemination of modern architecture and urban design.

Together with Queen Margrethe, the Crown Prince subsequently visited the Stiftung Flucht, Vertreibung, Versöhnung, which is a newly inaugurated documentation centre focusing on relocation, expulsion and forced migration in twentieth-century Europe. During the visit, Her Majesty and the Crown Prince were accompanied by, among others, the President of Germany.

In the evening, the Queen hosted a return dinner in honour of the President. In connection with the event, the Queen welcomed the guest. In her speech she said: “I am also pleased to be able to welcome so many prominent representatives of both the Danish and German cultural and business life, whose presence here tonight is in itself a testament to the close ties and strong ties between our two countries”.