Who was Queen Fabiola of Belgium? 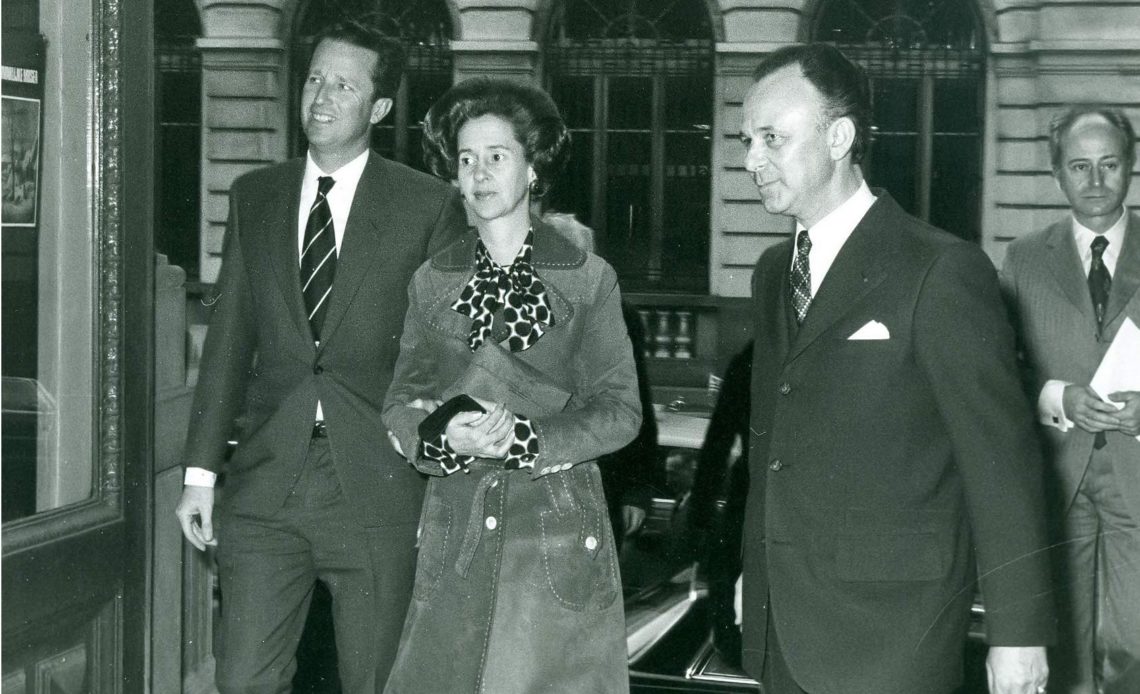 Queen Fabiola of Belgium was the Spanish-born consort of King Baudouin of Belgium and reigned alongside her husband from 1960 until his death in 1993.

Prior to her marriage, Queen Fabiola was a nurse. She was selected as a suitable wife for King Baudouin when Sister Veronica O’Brien arrived in Madrid with a mission from the auxiliary bishop of Malines to find a bride for the lonely king. The King had confided in Sister Veronica that he wished to marry a devout Catholic, preferably one who was a Spanish aristocrat.

Fabiola was discovered and visited Sister Veronica in Brussels, where she met her future husband for the first time. Sister Veronica said that she “came in like a breath of fresh air, tall thin, well-built, good-looking and striking, bubbling with life, intelligence and energy.”

When Fabiola discovered the purpose of her visit to Brussels, she reportedly became enraged, but later calmed down and returned for another visit. She accepted King Baudouin’s proposal and the couple were married on 15 December 1960.

Queen Fabiola’s wedding dress was designed by Cristóbal Balenciaga and featured a fur-trimmed collar, three-quarter length sleeves, and a 22-foot train. She is reported to have stayed up most of the night prior to her wedding, spending the time in prayer and fasting so that she could take the Eucharist on an empty stomach.

TIME magazine called her the “Cinderella Girl” before her marriage, noting that she was “an attractive young woman, though no raving beauty…the girl who could not catch a man.”

Unfortunately, King Baudouin and Queen Fabiola were unable to have children, as all of Fabiola’s pregnancies ended in miscarriages. The Queen spoke of this in an interview in 2008, saying, “You know, I myself lost five children. You learn something from that experience. I had problems with all my pregnancies, but you know, in the end, I think life is beautiful.”

King Baudouin spoke about this in 1979, telling Belgian youth, “For many years we struggled to fathom the meaning of this sorrow. But gradually we came to understand that, having no children ourselves, we have more room in our hearts to love all, truly all, children.”

Queen Fabiola dedicated her life to charitable work, particularly in the areas of mental health, children’s issues and women’s issues. She received several humanitarian awards in her lifetime and was awarded the Ceres Medal in 2001 by the UN Food and Agriculture Organisation for her work with women in developing countries.

Queen Fabiola spoke several languages, and upon her marriage, took care to learn Dutch. She spoke Spanish, French, English and German and Italian as well.

By all accounts, King Baudouin and Queen Fabiola were a loving, devoted couple who shared an immense sense of faith. Unfortunately, on 31 July 1993, he died of heart failure in Spain. His death sparked an unprecedented outpouring of grief in Belgium – with people waiting in line for up to 14 hours waiting to see his body as it lay in state at the Royal Palace in Belgium. Queen Fabiola wore white to her husband’s funeral. Notably, Queen Elizabeth II of the United Kingdom attended the funeral – the only time she has ever attended the funeral of a foreign monarch.

Baudouin was succeeded by his younger brother, Albert II, and Fabiola decreased her public appearances so as not to overshadow the new queen, Paola. She moved into Stuyvenberg Castle upon her husband’s death.

In her later years, Queen Fabiola suffered periods of ill health. In 2009, she was hospitalised with pneumonia and a lung infection that she never truly recovered from. She also suffered from osteoporosis.

On 5 December 2014, Queen Fabiola died in her home at Stuyvenberg Castle.