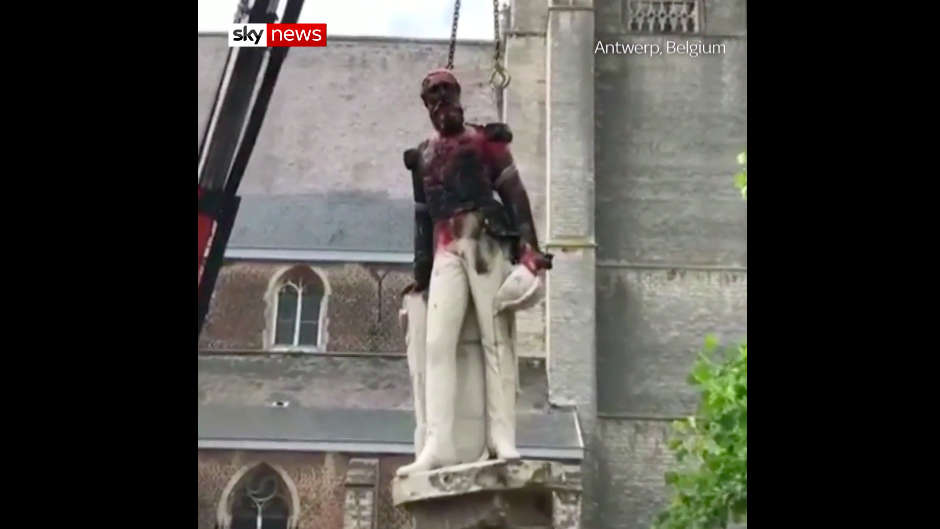 Pictures from Sky News (fair use)

A controversial statue of King Leopold II has been removed in Belgium after it was vandalised by protesters.

The statue is to undergo repairs, however, it is unlikely to return to public display and could end up in a museum.

There have long been calls for the statue of Leopold to be removed due to the former King’s exploitation of Congolese slave labour which left millions of people dead.

King Leopold II was King of the Belgians from 1865 until his death in 1909. He was the founder and sole owner of the Congo Free State, a private project.

Henry Morton Stanley helped him to lay claim to Congo, and the Berlin Conference authorised his claim to improve the lives of the native inhabitants.

However, Leopold ignored the conditions set out by the Berlin Conference and millions of Congolese inhabitants, including children, were mutilated and killed.

The death toll is estimated to be between one million and 15 million. This is such a broad estimate because there were no records kept of the inhabitants before Leopold acquired the land.

He used a mercenary force for his personal enrichment and used the profits for private and public construction projects in Belgium.

Leopold was eventually forced by the Belgian government to relinquish control of the colony in 1908. This cost Belgium 215,5 million Francs and this money was used to discharge the debt of the Congo free state and for the payment of its bond holders.

Around 45.5 million Frans was paid for Leopold’s building projects in Belgium, and he was personally paid 50 million Francs.

The state then became a Belgian colony known as the Belgian Congo.

Entire archives were burned to conceal any potential evidence of Leopold’s wrongdoing.

Congo gained its independence in the mid-20th century and was renamed three times.