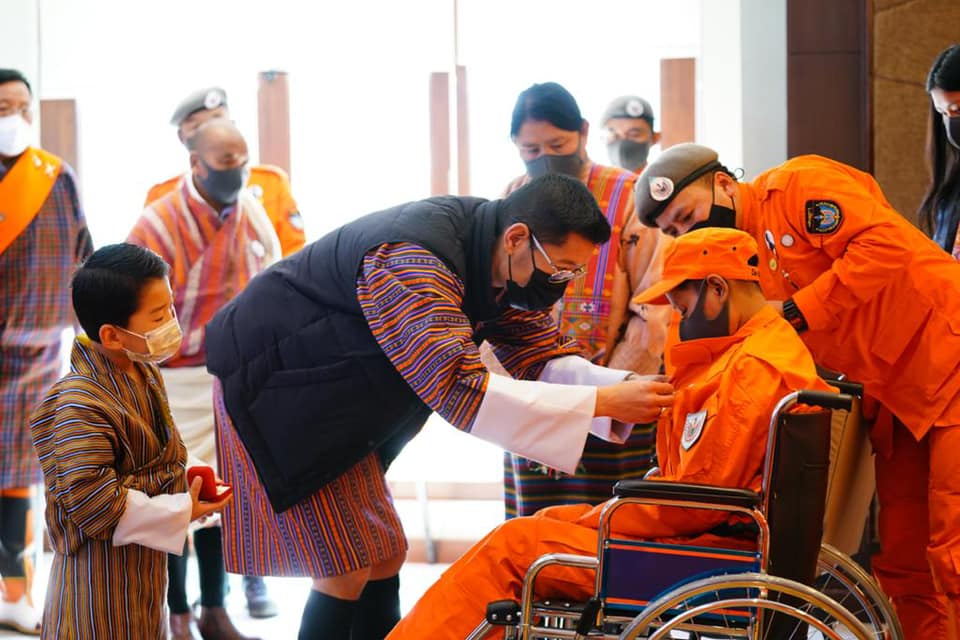 King Jigme Khesar Namgyel Wangchuck of Bhutan personally presented a Desuup volunteer with two medals on his 41st birthday. These Desuup pins are earned by the Desuup volunteers for their voluntary service and can be worn on their uniforms.

The King was accompanied by his wife, Queen Jetsun Pema, and their elder child, Crown Prince Jigme Namgyel Wangchuck, 5.

Desuup Phub Gyem received the Druk Thuksey Representation Pin and the COVID-19 Service Pin and was personally granted these pins on Sunday.

The Desuung office wanted Phub Gyem to receive her medals on the King’s birthday and organised a small ceremony for her. The King’s presence was a surprise for everyone, but he wanted to be there in person to give her the medals after she survived a tragic accident in September of last year.

Phub Gyem was on patrol in September late at night in Thimphu – not long after the first lockdown was lifted. Phub Gyem and another Desuup, Dechen Tshomo, were hit by a Bolero pick-up truck while crossing the road, and Phub Gyem sustained life-threatening injuries.

Both Desuups, on Royal Command, were airlifted to Delhi, India, for treatment. Phub Gyem was on life support and underwent several surgeries. After five months of recovery, she returned to Bhutan in January. She is currently undergoing therapy to regain full control of her motor abilities.

Upon her return to Bhutan, her father told the media: “My daughter is with us because of His Majesty’s command that no efforts should be speared for her recovery. We also want to thank all the people of Bhutan for their prayers.”

The King told 25-year-old Phub Gyem how brave and resilient she was and expressed his confidence that she would be able to make a full recovery. Their Majesties and His Royal Highness also spoke to Phub Gyem’s family and Dechen Tshomo before returning home. Desuup Dechen Tshomo has been able to return to Desuup duties.

The Druk Thuksey Representation Pin was awarded to all Desuups on National Day and the COVID-19 Service Pin was granted to all desuups who worked in varying capacities to help Bhutan recover from the pandemic.