King and Queen of Bhutan mark ten years of marriage 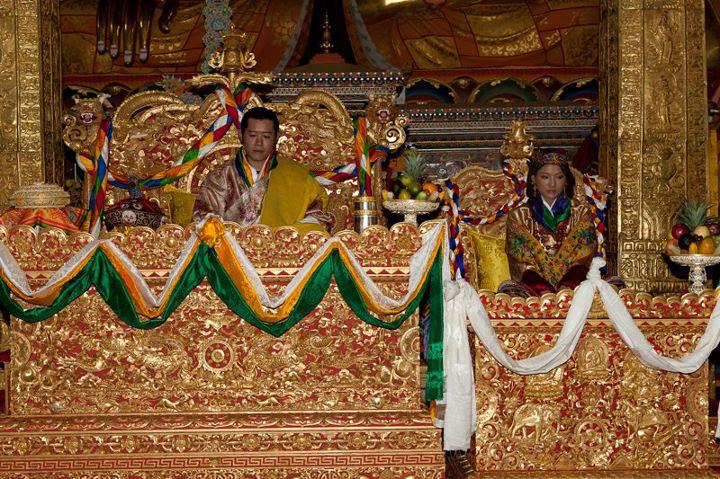 The couple during their wedding. Photo: Royal Office for Media

The King met Jetsun Pema, who comes from the country’s elite, when she was around seven-years-old, and he was 17. Years later, they fell in love and became engaged.

He announced his upcoming marriage during the opening of Parliament in 2011. His Majesty then described his bride:

“Now, many will have their own idea of what a Queen should be like—that she should be uniquely beautiful, intelligent and graceful. I think with experience and time, one can grow into a dynamic person in any walk of life with the right effort. For the Queen, what is most important is that at all times, as an individual, she must be a good human being, and as Queen, she must be unwavering in her commitment to serve the People and Country. As my Queen, I have found such a person and her name is Jetsun Pema. While she is young, she is warm and kind in heart and character. These qualities together with the wisdom that will come with age and experience will make her a great servant to the nation.”

King Jigme Khesar Namgyel Wangchuck married Jetsun Pema on 13 October 2011 at the administration centre, Punakha Dzong, in Punakha. The pair wed in a traditional Buddhist ceremony and had received blessings from the holy relic of Shabdrung Ngawang Namgyal ahead of their wedding.

Astrologers set the time of the wedding, and the ceremony began at 8:20 in the morning. The King wore the same outfit his father and grandfather wore at their weddings – a patterned silk yellow gho that featured roses. Jetsun Pema wore a kira (the national dress for Bhutanese women woven from raw silk); she wore a yellow tego (jacket) over her red, yellow, green and white kira.

This was followed by the Tashi Ngasoel ceremony held at Grand Kuenra. Ngoedrup Langwa prayers were chanted by the Je Khenpo (head monk) for virtues of the spiritual and physical world. The King and new Queen then received symbolic gifts from civil and religious authorities before a formal presentation was held of congratulations. Public celebrations were then held in Punakha.

Public celebrations took place for several days in Bhutan. The Bhutanese government declared 13-15 October as national holidays, and the King and Queen greeted people in the capital of Thimphu on the 14th. The following day they attended a public celebration at the Changlimithang Stadium in the city.

Unlike European royal weddings, foreign royals were not in attendance. The Bhutanese Royal Family attended alongside government members, friends and family of the couple, Indian dignitaries and some Westerners.

The couple also held a Hindu ceremony on 17 October out of respect for Bhutanese Hindus. They met many Bhutanese Hindus and the head of the Bhutanese Hindu community. They also donated money for a new Hindu temple and for Hindus in Bhutan.