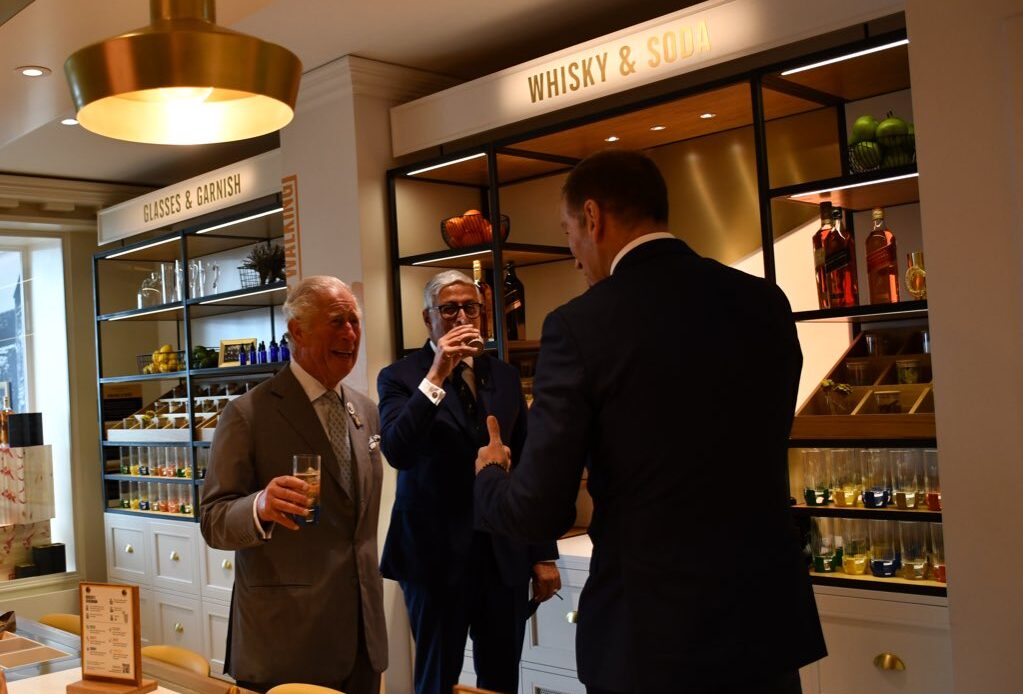 On Friday, 1 October, the Duke of Rothesay enjoyed a sip of his own bespoke whiskey cocktail as he officially opened the new Johnnie Walker Experience in Edinburgh’s Princes Street during his trip to Edinburgh. Offering views of the city and Edinburgh Castle, the experience allows customers a unique drinking experience.

Prince Charles, who is known as the Duke of Rothesay in Scotland, toured the eight-floor tourist attraction and unveiled a plaque on the rooftop terrace bar. Located in the former House of Fraser building, the centre is part of a £185 million investment in the drink company, Diageo’s venues, and distilleries across the country.

During the visit, Charles met the first students in the Johnnie Walker Learning for Life Academy. In the academy, local unemployed community members can participate in an award-winning hospitality training programme. The programme is one of Diageo’s initiatives and promotes gender equity, inclusive, sustainable growth, and better health and well-being. One and half million people have gone through the Diageo Bar Academy, and a further 200,000 have gotten improved employability because of their training.

Friday’s visit launched a partnership between Johnnie Walker and The Prince’s Foundation, delivering training and employment opportunities while supporting the sustainable recovery of the hospitality and tourism industry in Scotland. Diageo chief executive Ivan Menezes said on the partnership: “We are grateful to His Royal Highness for the interest he has shown in the Scotch whisky industry, and we look forward to working in partnership with The Prince’s Foundation to create opportunities for people in communities across Scotland to get into training and employment in hospitality and tourism.”

The Duke has been attending various engagements in the city before appearing at the Kirking of the Parliament at Edinburgh’s St Giles Cathedral – the ecumenical service of blessing on the eve of the opening ceremony to the sixth session of Scottish Parliament.