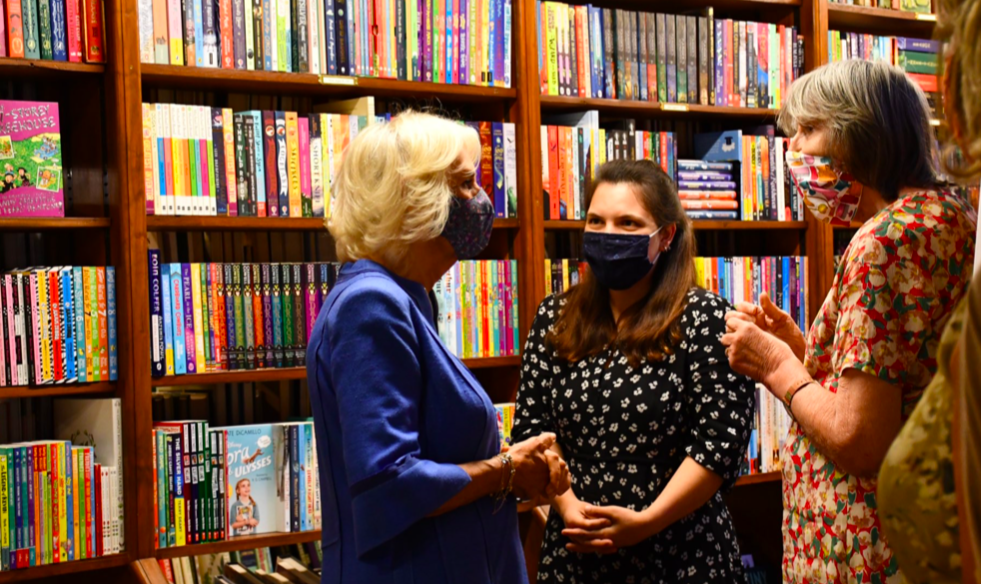 The Prince of Wales and the Duchess of Cornwall are carrying out their annual Wales Week, spending time visiting different communities, businesses, and organisations in Wales. The Duchess is carrying out several engagements, including a visit to the famous Hay-on-Wye to highlight the Hay Literary Festival and several independent businesses.

The Duchess started her visit by meeting Hay Literary Festival organisers  Interim Chief Executive of the Hay Festival, Tania Hudson and Hay Festival Chair, Caroline Michel at Booth’s Bookshop to discuss the 2021 festival. Like many other festivals and events, the Literary Festival has had to adapt and move online. This year, the festival took place from 26 May to 6 June, and saw people from 135 countries watching online talks, debates, and performances, and taking part in live and online discussions. Started in 1987, the festival aims to encourage authors and readers to discuss their stories and opinions, and to engage with literary fans across the world.

It is a favourite event of the Duchess; after attending with Prince Charles in 2013, she has attended by herself three times in the last decade. Camilla pre-recorded a message to open the festival this year. She was able to visit Booth’s Cinema Room where the festival was broadcast from this year.

Students from Hay Primary School presented some of their creative writing projects to the Duchess, and then presented her with a set of books.

After chatting about books, the Duchess walked over to Shepherd’s Ice Cream Parlour to meet with owner Jess Hope-Jones and other staff and customers. She tried some sheep’s milk ice cream, and when speaking with the owner, she mentioned her son being interested in the ice cream; Tom Parker-Bowles is a British food writer and critic.