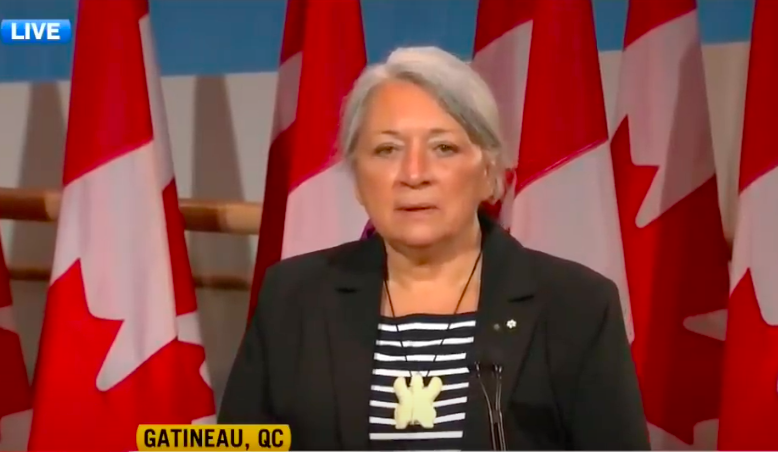 Canada has a new Governor General after Julie Payette resigned in January of 2021, amidst serious bullying and harassment allegations in her office. On Tuesday 6 July, the Prime Minister’s Office announced that Her Majesty Queen Elizabeth has approved Mary Simon’s appointment as the next Governor General of Canada. This is an historic appointment, as Simon is the first Indigenous person to hold the office.

Born in 1947, Simon was a broadcaster for CBC North, the division that covers the Northern territories and areas of Canada. Born to a non-Inuit father and an Inuk mother, Simon lived in Kuujjuaq, a Hudson’s Bay outpost in Northern Quebec. Simon attended the Fort Chimo day school, but did not have the opportunity to learn French while attending the school. Simon told reporters in Gatineau, QC that while she was unable to learn French at school because the government-run school did not offer French, she will be learning it while serving as Governor General.

Throughout her career, Simon has taken part in many landmark negotiations. In the 1970s, she was a part of the team that negotiated the James Bay and Northern Quebec Agreement, and in 1982, she served as a senior Inuit negotiator when the Canadian Constitution was passed. She has held numerous leadership positions in Indigenous organisations, including the Northern Quebec Inuit Association, Makivik Corporation, and Inuit Tapiriit Kanatami.

In Canada, the Governor General must provide royal assent for legislation on behalf of the monarch, and adjudicate constitutional disputes.

Several unmarked, mass graves at the sites of residential schools have been re-discovered in the last month, and Indigenous issues continue to be a pressing issue in Canada. With more and more citizens pressing the government for action, this is truly a historic appointment.

Speaking of the appointment, Prime Minister Justin Trudeau said: “I am very pleased to announce that Her Majesty The Queen has graciously approved the appointment of Mary Simon as the next Governor General of Canada.

“Ms Simon has dedicated her life to advancing social, economic, and human rights issues for Canadian Inuit and Indigenous peoples, and I am confident that she will serve Canadians and promote our shared values with dedication and integrity.

“Through this appointment, we are ensuring that Canada is represented by someone who exemplifies the very best of our country. I also join Canadians in thanking Richard Wagner, for serving as the Administrator of the Government of Canada the past few months.”