Prince of Wales thanks London Tube staffers for pandemic work 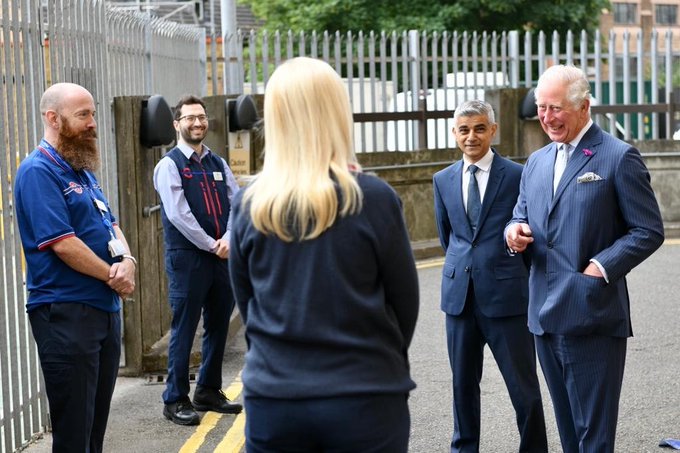 The Prince of Wales joined the Mayor of London for a visit to the Transport for London’s Ashfield House training centre in West Kensington on Thursday morning to thank the staff who have been working throughout the COVID-19 pandemic.

The Transport for London network has been operational throughout the COVID-19 pandemic, and, according to Clarence House, has been “helping enable NHS staff and other key workers to travel to and from their jobs during lockdown.”

Upon his arrival, Prince Charles was greeted by Mayor Sadiq Khan, who introduced him to the TfL staff members, which included station staff and cleaners who work at the West Kensington Tube Station “who have helped to main the tube service throughout the pandemic, allowing key workers to travel.”

The Prince continued his new form of greeting, offering a ‘namaste’ instead of shaking hands when he met with the staff members. Prince Charles told the staffers at Transport for London: “Thanks for doing so much, thanks for all your hard work, I don’t know how you do it.”

According to Clarence House, around a third of Tube staff were off work during the pandemic’s high point, either ill, shielding, or self-isolating, but now they have returned to work, and the Tube’s are operating at 90% of weekday services. At the height of the pandemic, the Tube was still maintaining 50% of its services for essential workers.

Mayor Khan told reporters that Prince Charles reached out to him to discuss the pandemic response and thanked him for keeping London going.

“The great thing, he’s met everyone from cleaners who are crucial to keeping public transport clean, the deep cleaning, to the commissioner—so you can see the response in their faces.

Mayor Khan continued: “But for the public transport running during the lockdown, NHS workers, care workers, those who work in shops wouldn’t be able to get to work to serve our city.”

Clarence House noted: “Stickers have been installed in stations to help customers socially distance, and TfL staff have been doing all they can to further encourage appropriate distancing by using crowd plans, station announcements and posters.”