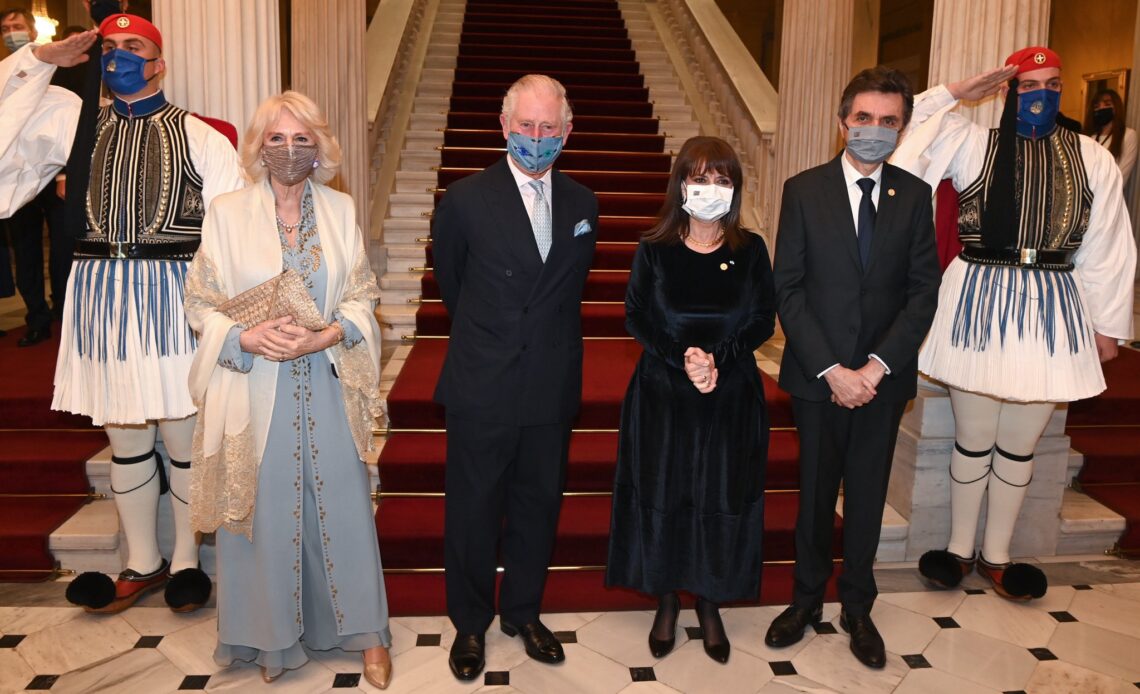 The Prince of Wales and The Duchess of Cornwall arrived in Athens for a two-day visit in celebration of 200 years of Greek independence on Wednesday, with Prince Charles extolling the country for having “long held the most special place in my heart.”

Arriving in the early evening, Prince Charles and Camilla were greeted at the Athens International Airport by the UK’s Ambassador to Greece, Kate Smith. They then traveled to the National Gallery for its official reopening ceremony.

At the National Gallery, Prince Charles and Camilla were greeted by the Greek Prime Minister, Kyriakos Mitsotakis and his wife, Mrs. Mareva Grabowski-Mitsotaki. They viewed the paintings by British artists Thomas Gordon and Frank Abney Hastings, and heard speeches from the Prime Minister; Lina Mendoni, Minister of Culture; and Marina Lambraki-Plaka, the Director of the National Gallery.

In the evening, Prince Charles and Camilla arrived for an official state dinner at the Presidential Mansion, hosted by Greek President Katerina Sakellaropoulou. During the meal, Prince Charles gave a speech highlighting his family history in Greece.

He said, “Greece is the land of my grandfather; and of my father’s birth, nearly one hundred years ago, in the centenary year of Greek Independence. Later, it was in Athens that my dear grandmother, Princess Alice, during the dark years of Nazi occupation, sheltered a Jewish family – an act for which in Israel she is counted as ‘Righteous Among The Nations.’”

Prince Charles continued, “In feeling a profound connection to Greece—her landscapes, her history and her culture—I am hardly alone: there is something of her essence in us all. As the wellspring of Western civilization, Greece’s spirit runs through our societies and our democracies. Without her, our laws, our art, our way of life, would never have flourished as they have.”

In speaking about the history of Greek triumphs, Prince Charles drew parallels to the country’s economic crisis and the coronavirus pandemic response, saying, “I have such admiration for the fortitude of the Greek people, and have been particularly touched by the remarkable resilience of her youth. It gives me special pride that my Prince’s Trust International has been able to help so many young people in Greece into work, training, or to start their own enterprises, empowering them to achieve their potential and to contribute to their country’s prosperity and strength.

“Your Excellencies, Ladies and Gentlemen, as we all work to rebuild our societies and our economies from this year of previously unimaginable upheaval, and to set our world on a more sustainable path, perhaps we can take some inspiration from the courage, determination and ambition of 1821. Once again, the stakes could hardly be higher. The choices we make will determine the fate not only of our nations, but of this singular planet which we all share. For my part, to support this vital endeavour, I have worked with hundreds of CEOs around the world to develop a roadmap that places people, planet and Nature at the heart of our economic transition.  I have called this plan the Terra Carta, and I am deeply touched that Athens wishes to enact the ideas it offers.

“Your Excellency, today, as in 1821, Greece can count on her friends in the United Kingdom. The ties between us are strong and vital, and make a profound difference to our shared prosperity and security. Just as our histories are closely bound together, so too are our futures. In this spirit, tomorrow, stood beside you once again, your British friends will take great pride in Dionýsios Solomós’s rousing exhortation: Χαίρε, ω χαίρε, ελευθεριά [Hail, O Hail Liberty]. Ζήτω η Ελλάς! [Long live Greece].”

Prince Charles and Camilla continue their visit to Athens tomorrow, laying a wreath at the Monument of the Unknown Soldier at Syntagma Square; attending an Independence Day Military Parade; and meeting with Greek dignitaries before departing for the United Kingdom.

Their visit comes at the request of the British Government and the royals have been following all public health guidelines.