Charles and Camilla celebrate a special anniversay in Edinburgh 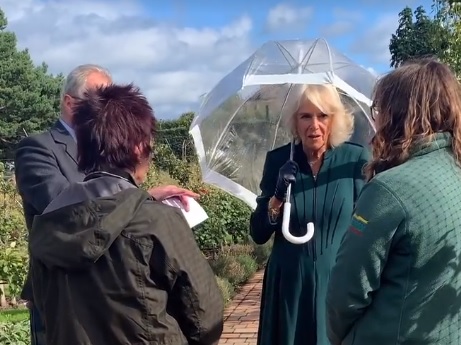 A year after initial plans were put on hold by the pandemic, special celebrations marking the 350th anniversary of the Royal Botanic Gardens in Edinburgh have taken place.

The Duke and Duchess of Rothesay, as Charles and Camilla are known when in Scotland, spent time at the famous gardens where they heard about current research and forthcoming initiatives addressing pressing environmental issues.

Charles headed into the Botanic Cottage, a focal point of learning during the Scottish Enlightenment, to hear about 21st century developments in tackling the biodiversity crisis and climate emergency. Camilla chatted to some of the staff tending the gardens who also gave their royal visitors an overview of the activities and schemes they run to help the wider community to engage with the environment.

The couple also visited the Queen Mother’s Memorial Garden which they opened in 2006. They were given an overview of plans for the garden as well as an update on the Edinburgh Biomes project which will see the public glasshouses restored and research houses replaced with more modern facilities.

Regius Keeper, Simon Milne, said afterwards ”we are privileged to be part of one of the world’s finest and most respected botanic gardens and it has been an honour to share some of our stories with The Duke and Duchess of Rothesay.”

Prince Charles had earlier helped The Queen plant a tree at Balmoral, marking the start of planting season for The Queen’s Green Canopy. It’s hoped the scheme will see thousands of people across the UK plant a tree for the Platinum Jubilee to create a lasting legacy of The Queen’s historic reign.