The Queen’s Reign in Jewels: the Aquamarine Parure 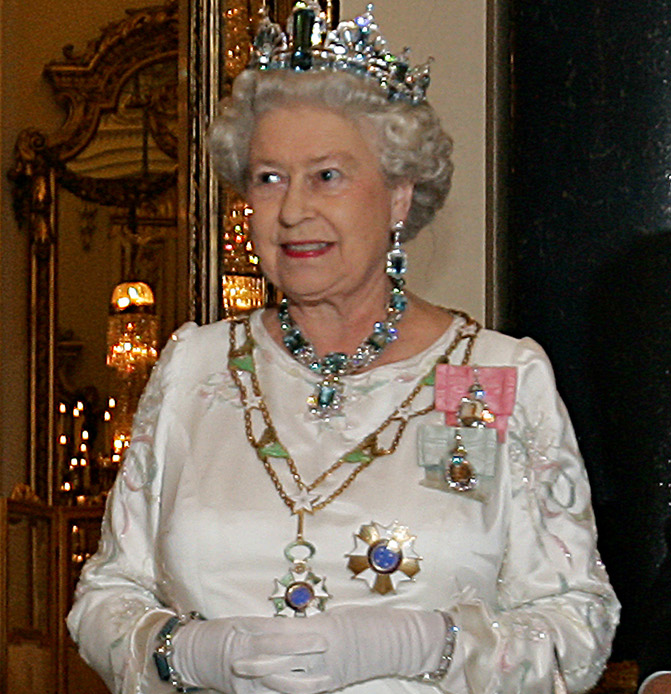 The Queen’s Aquamarine Parure began as a coronation gift and has morphed into a jewelled legacy between a Monarch and the people of Brazil who contributed, over a period of 15 years, to one of The Queen’s most fashionable and complete parures.

The Queen was gifted the beginnings of the Aquamarine Parure from the President of Brazil on behalf of his country as a Cgift in 1953. This first gift included a necklace and pendant earrings. The necklace featured nine large, rectangular aquamarines set in diamond scrolls and a large aquamarine pendant drop that would later become the central stone of a refashioned tiara.

A few years later, in 1957, The Queen had a tiara created by Garrard & Co. to go with her aquamarines. The tiara’s bandeau was fashioned out of aquamarines and diamonds, and three large aquamarines were fixed upright in the front and to each side, surrounded in diamonds.

Brazil continued to add aquamarines to The Queen’s collection, and in 1958 she was gifted with a bracelet and brooch to add to her parure. In 1968, during a State Visit to Brazil, the Governor of São Paulo gave her aquamarine and diamond hair ornaments.

A few years after her Brazilian visit, in 1971, The Queen had these scroll-designed hair ornaments added to the aquamarine tiara and replaced the central stone with the large, rectangular cut pendant aquamarine that used to hang from the Brazilian aquamarine necklace.

Though she has only visited Brazil once in her reign, she has received Brazil three times for State Visits, and delights the country’s representatives each time by diplomatically wearing pieces from the Brazilian Aquamarine Parure.

The Queen has worn the Brazilian Aquamarine Parure regularly throughout her reign, most recently wearing the tiara at the Spanish State Banquet in July 2017.