The Cambridges share their baking efforts for the Big Jubilee Lunch 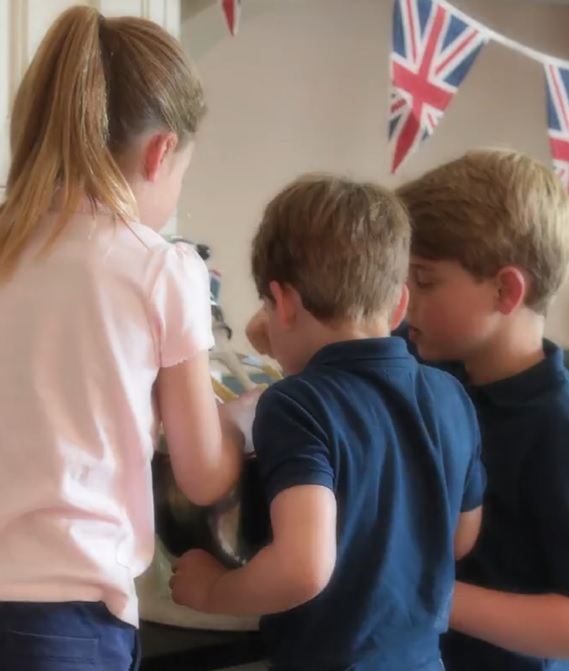 It’s been a busy weekend for the Cambridge children, and on Sunday morning, as the United Kingdom gathered together for Big Jubilee Lunches, Kensington Palace shared new photos of the children making cakes for the street party in Wales.

The Kensington Palace social media accounts shared a montage of photos of the Duchess of Cambridge, Prince George, Princess Charlotte, and Prince Louis making cakes, with the caption, “Baking cakes for the local community in Cardiff to enjoy at a Platinum Jubilee street party taking place today! 🎉

The Cambridge family, minus Prince Louis, travelled to Cardiff on Saturday for a whirlwind visit as preparations were underway for a special Platinum Jubilee concert on the grounds of Cardiff Castle.

For Prince George and Princess Charlotte, who got to test out the lighting and sound boards, conduct the orchestra, and meet a goat, it was their first official visit to Wales.

The family then flew back to London via helicopter in the afternoon before appearing once again at the Platinum Party at the Palace later that evening.

The Cambridge children began their busy Platinum Jubilee weekend by taking part in their first carriage procession as part of Thursday’s Trooping the Colour ceremony.

On Sunday, William and Kate appeared at the Big Jubilee Lunch at Kensington Memorial Park while the Prince of Wales and the Duchess of Cornwall were present at the flagship lunch in London and the Earl and Countess of Wessex were along the Long Walk at Windsor Castle.