Ten royals who have presented the trophies at Wimbledon 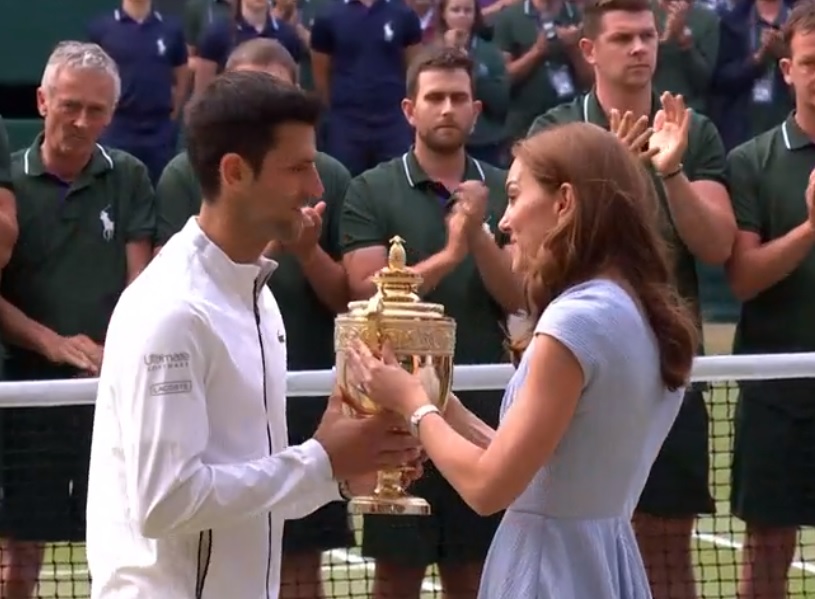 By rights we should all be settling down to watch the finals at Wimbledon this weekend. And while the tennis is always top notch, there’s as much fun in spotting who’s who in the crowd and enjoying the royal turnout. It simply wouldn’t be Wimbledon if there wasn’t a Windsor on hand to hand over the trophies.

This year, we have to make do with memories as the Championships are off owing to the coronavirus pandemic. The Duchess of Cambridge, complete with tennis print dress from HVN, got us ready with her warm up with school children on Wimbledon finals’ eve. So grab your strawberries, steady with the cream and enjoy Royal Central’s run down of ten royals who have presented the trophies at Wimbledon.

The Queen isn’t known for her love of tennis but she’s done the honours at Wimbledon several times and helped celebrate some famous winners there. She took centre stage on Centre Court during her Silver Jubilee year when Virginia Wade won the Singles. Twenty years earlier, the Queen had presented the Venus Rosewater Dish to Althea Gibson following her famous Singles win.

The Queen’s father was much keener on tennis and famously played at Wimbledon while still the Duke of York. He took to the courts in the Doubles but got nowhere near the winners’ trophies. However, as King George VI, he finally got his hands on the silverware, albeit to hand it over to Jack Kramer after his Singles win in 1947.

For many people, Princess Marina remains the Windsor most associated with Wimbledon. This Duchess of Kent made tennis her passion and she was hugely instrumental in building the profile of the championships through her ongoing support. She presented the trophies for years and the All England Club became an integral part of her royal life. Marina made her last public appearance at Wimbledon in 1968. Soon after that year’s event, she was diagnosed with an inoperable brain tumour and died soon afterwards.

Following in her mother’s footsteps, Princess Alexandra of Kent has been in charge of the trophy presentation at Wimbledon, too. It was no doubt a bittersweet moment for the princess to celebrate with the winners in 1971, just three years after Marina’s last time at the All England Club.

The Princess Royal was on hand to present the Women’s Singles Trophy in 1969, the first Championships to take place after the death of Princess Marina. Anne, in a very large hat, handed over the famous Venus Rosewater Dish to Ann Jones as she claimed her only Singles title at the All England Club.

Princess Margaret did the honours in 1970, presenting tennis legend John Newcombe with his second Singles title there. Margaret did a Grand Slam of her own by also presenting the Women’s Singles trophy that year to Margaret Court.

The Duke of Kent

The undisputed king of Wimbledon is Edward, Duke of Kent. As President of the All England Tennis Club he’s presented the trophies there more than any other royal and is still a regular in the Royal Box. In 2013, he got to lead celebrations as the UK got its first Men’s Singles Champion in almost eight decades and the Duke, in his always understated way, presented the famous silver gilt cup to Andy Murray.

The Duchess of Kent

Just as synonymous with Wimbledon is the Duchess of Kent who, for the best part of three decades, did the honours at the Ladies Singles Final. The Duchess was part of one of the most famous moments at the Championships when she comforted Jana Novotna who wept on her shoulder after losing a closely fought final in 1993. She was also there to celebrate with Novotna when her Wimbledon dreams finally came true five years later.

Now meet the royal you didn’t know had been a regular at Wimbledon. Princess Helena Victoria of Schleswig-Holstein, called Thora by her family, was a granddaughter of Queen Victoria who loved sport. She particularly enjoyed tennis and often headed to the All England Club. She was such a tennis fan that she also did the honours when Great Britain won the Davis Cup at Wimbledon in 1934.

The Duchess of Cambridge

Carrying the royal support of Wimbledon well into the 21st century is the Duchess of Cambridge who loves tennis and who became patron of the All England Club in 2017. Kate made her debut presenting the trophies in 2019 at the end of the Men’s Singles Final under the watchful eye of the Duke of Kent who stood aside to allow his cousin by marriage to serve up the honours.