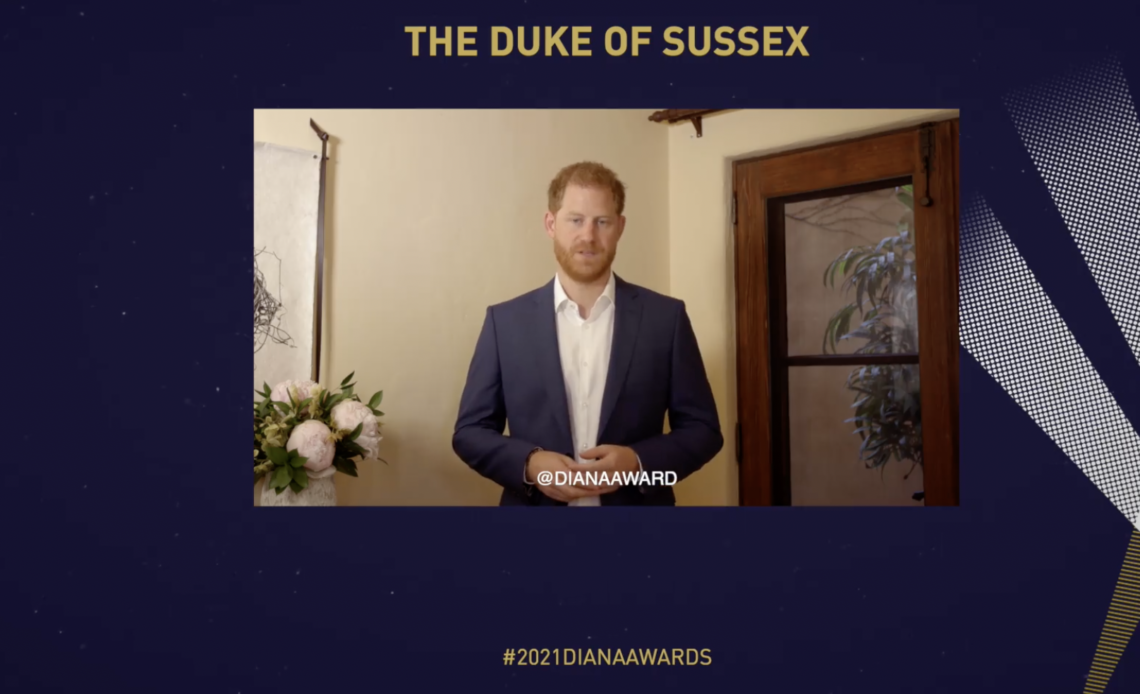 The Duke of Sussex praised “a new generation of humanitarianism” in a video message played during the virtual ceremony for this year’s Diana Awards.

The event took place just days before what would have been his mother’s 60th birthday, and Harry, along with youth empowerment charity The Diana Award, recognised young leaders from across the globe during the 2021 awards ceremony.

In his speech, Prince Harry said:

“I’d like to start by acknowledging and celebrating the incredible young people joining us today. And wherever you are right now, I want to thank you for being part of this important moment and for being such an invaluable asset to your community. I’m truly honoured to be celebrating your work, your commitment to change-making, and the vital role that you’ve taken on representing a new generation of humanitarianism.

“Later this week, my brother and I are recognising what would have been our mum’s 60th birthday, and she would be so proud of you all for living an authentic life with purpose and compassion for others. Our mum believed that young people have the power to change the world. She believed in your strength, because she saw it day in and day out. And in the faces of young people exactly like you, she witnessed a boundless enthusiasm and passion, and I too, see those same values shine through.

“As it has done for 21 years now, The Diana Award carries her legacy forward by putting young people at the centre of our future. This has never been more important, and Meghan and I fundamentally believe that our world is at the cusp of change. Real change for the good of all.”

Harry, who is currently isolating at Frogmore Cottage ahead of Thursday’s Diana, Princess of Wales statue unveiling, continued that the ongoing public health crisis has uncovered “severe inequities and imbalances around the world.” He stressed the disparity in vaccination rates across the globe, noting how communities of colour have been especially impacted.

“There is great need for young leadership and there is no greater time to be a young leader. I believe in you. We believe in you. And that belief in your own ability to change the world in doing the right thing is what makes you a force to be reckoned with,” he added, before closing with a message to “stand up for what you believe in and trust that when you live by truth, and in service to others, people will see that just as they did with my mum.”

Harry then introduced Jacqueline Teague, one of the young changemakers receiving an award. Teague, a Kentucky high school student, helped more than 900 people get their jabs after seeing her grandparents struggle to sign up for a vaccine.

Diana Awards are given to young people ages 9 through 25 who have made a difference in their communities through humanitarian work or social action. The Diana Award is the longest running award for young people through a retrospective nomination process only, as young people can not apply for the award themselves or specifically work toward receiving one.